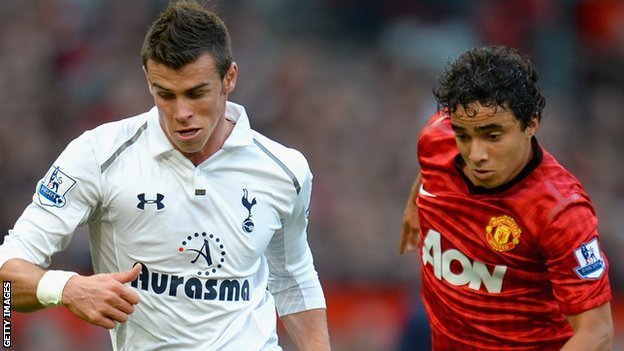 From the outset at Manchester United, David Moyes has maintained his belief that we could challenge the ever-increasing moneybags of today and be competitive in the transfer market. His post-match comments after last night’s tactical chess match stalemate with Chelsea gave familiar echoes and insight into our financial position.

“The owners have given me every opportunity to get who I want so we’ll continue to look for those players. It’s been tough in this window but we’re always looking at the best players.”

Us fans, who let’s face it have been hugely dissatisfied to date with our activity this summer, have put 1 and 1 together all summer, especially considering Sir Alex’s comments before retiring,

Everything is in place for us to make a big name signing.

Moyes was coy and somewhat cunning in responding to Geoff Shreeves’ questions about a potential hijacking of Real Madrid’s well-known public pursuit of Gareth Bale. Failing to confirm or deny whether we had attempted to scupper the Spanish club, Moyes gave off the impression that something was happening behind the scenes, grinning as he answered.

After the cameras were switched off and the attention shifted to the written press’ questions, Moyes subsequently said ‘no’ when asked if he had bid for Bale. So what could be going on?

Can anyone hand on heart say with confidence that Bale to United for a world-record fee is realistic? Firstly, the £86M fee touted was the price to foreign suitors. After the drawn-out, hyper-inflated deals for Michael Carrick and Dimitar Berbatov, surely Daniel Levy even contemplating an offer from a domestic rival, let alone United, is an implausible prospect. Levy would shred the fax, yes I still think deals are done the retro way, once he saw the Manchester United badge at the top of the paper. Even if we caught him at a weak moment and he engaged with us in negotiations, can you imagine the sort of money it would take to lure Bale? My guess is it would be crippling figures that may make Malcolm Glazer’s heart miss a beat in pure shock.

Although Bale is undoubtedly a stunning player and would significantly improve our team, I cannot see us pulling off a Willian size proportion hijack. It is just unrealistic.

So here is what Ed Woodward and friends might be up to.

It is plain for all to see that for some reason the Bale to Madrid transfer has stalled for whatever reason. Could it be Ed Woodward pulling the strings with Florentino Perez being the puppet?

Talk what an outsider may yet scupper Real’s Bale chase could all be a major smokescreen for some deceptive and cute tactics from that man Woodward. Woodward has been lambasted for his dithering and novice status in dealing with transfers. But could he yet turn from villain to hero in the matter of days, when it matters most?

It was widely speculated that the outsider to the Bale pursuit was in fact us. But was it brilliant crafted disguise Ferguson-esque? There has been talk that Levy has used this outside club, albeit mythical, to hike up the payment schedule of Madrid’s offer (which is 20 odd million each year for four year currently). That would be typical Levy, the master of getting his price.

From our point of view, it could be something much more significant. Could we have declared a passing interest in Bale, in order to force Real to play their real cards? With their Bale deal at an impasse, our threatened hijack could be used to force Madrid into waters they do not want to swim. Forcing them to finally complete their deal could well play into our hands.

The hijack could be a cute ploy which would eventually have to see Real balance their sketchy financial books ahead of the dreaded FFP. If the Bale deal is inflated because of our disguised threat, their need to compensate for that would see us reap the benefits.

Bale is simply a pipe-dream for us. But are Real Madrid’s players? Mesut Ozil stormed off down the tunnel after being substituted in last night’s victory over Granada, amid talk that he has been offered to us and Arsenal. His place is in grave danger with the arrivals of Isco and probably Bale. Ozil would be perfect for our midfield, as demonstrated by last night’s draw with Chelsea, we are missing creativity in the final third (not helped by the non-inclusion of Shinji Kagawa, which has been confusing).

What about Cristiano Ronaldo? How will he feel by being knocked off the top of the tree as the world’s most expensive player? We all know about his ego and need to feel loved. Would he still be loved and the centre of all attention once Bale becomes a Madridista? With less than two years on his existing contract, there is every chance we could yet see an improbable return. Daniel Taylor of the Guardian, respected in his field, broke news that Ronaldo had informed United of his desire to finish his career back where it all took off.

So why not strike while the iron is hot? He has still not signed this extension to his deal, which Perez claimed would be done in May. The emotional pull of a return to United is seriously appealing to him, this was clear when the two sides played each other at Old Trafford, Ronaldo almost broke down in tears allegedly.

Moyes has recognised publicly the need to make a stellar signing, do Baines and Fellaini fit that criteria? They’d be good additions but ‘marquee’? Not for me. Is there a massive sub-plot that is waiting to be revealed before September 2nd?

I wonder if all the Bale hijack talk, is a tactic to lure the marquee names of Ozil or Ronaldo before the deadline slams shut.

This next week is bound to be drama-filled and hectic. Fasten your seatbelts.