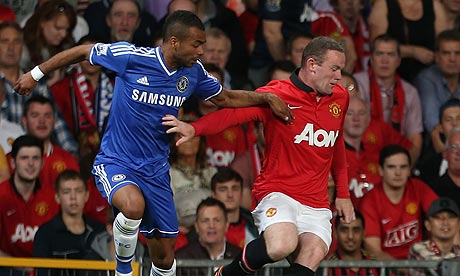 1. Can’t say that I’ve been looking forward to this one, so I’m delighted it’s out of the way and we didn’t lose. Monday night saw David Moyes’ first real test as Manchester United boss. We lost at home to Chelsea last season, so on the positive side you can see the draw as an improvement. I said before the game that I’d take a draw.

2. The most reassuring thing from the game was Tom Cleverley’s performance; man of the match by quite a distance. I’ve been a critic of his for sometime but last night he kept possession, made important tackles, and moved on play whenever called upon. The transfer window is near an end for the summer and we still haven’t signed a midfielder. Does that mean we’ll show a large sum of faith on the likes of Cleverley and gradually introduce Nick Powell? A small part of me wants that, but we realistically need a consistent and experienced midfielder alongside Michael Carrick. Cleverley is yet to fill me with that amount of confidence but I would love to be proven wrong.

3. Wayne Rooney started the game. It was a bold yet brave move by Moyes, who looked relaxed before the game. Both sets of fans chanted Rooney’s name all night and as Daniel Taylor from the Guardian pointed out, neither should have been. That aside, he performed brilliantly and worked hard. I couldn’t ask for more from a player that’s head been turned by Jose Mourinho and Chelsea. In terms of a man of the match performance, he wasn’t too far off Cleverley.

4. A quick observation I made throughout the game was how solid we were at the back. Moyes’ teams were always difficult to beat and despite starting without a single out-and-out striker, Chelsea really struggled to break us down. Rio Ferdinand and Nemanja Vidic were superb and both full backs did reasonably well, especially Patrice Evra. Defensively I cannot complain about Phil Jones as tonight was a clear indication that he is a centre back. We missed Rafael da Silva when bombing forward from right back.

5. Shinji Kagawa didn’t feature at all tonight. I thought in the last 5 minutes he could have made a difference, but it wasn’t to be. I know it’s only the second week but I do hope we see more of the Japanese midfielder this summer. If played in the hole behind Robin van Persie, we’ll see Kagawa at his best. And at his best we’ll be an even greater force going forward. If you saw him in his Borussia Dortmund days, you’ll know why.

Watch our Google Hangout with SWOL following the game where I gave a live reaction alongside respected writers Thomas Atzenhoffer and Tom Sunderland.

7 responses to “5 points to take from draw against Chelsea”