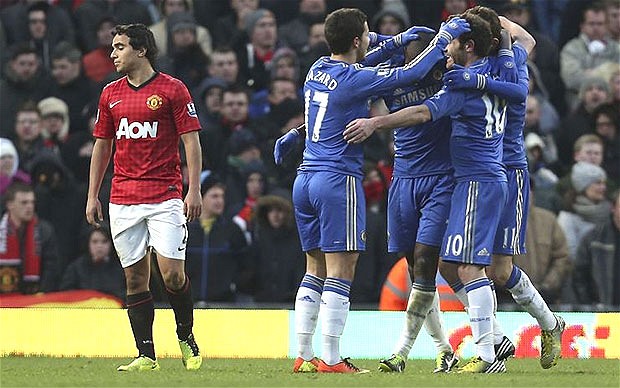 Moyes now steps into the Theatre of Dreams with a bit more expectation from the supporters in attendance. Manchester United and Chelsea square off on Monday evening both currently unbeaten in the Premier League.

Chelsea handled matters quiet easily against Hull City in their first match while the Blues struggled a bit against a resurgent Aston Villa side led by Christian Benteke. As for Moyes’ boys whom are one for one in the league, Robin van Persie per usual, will look to continue his fine goal scoring form. Four goals in two matches in the beginning of United’s season is a bright start, one of which he will look to continue on Monday. However, the most exciting storyline of Monday evening, is whether or not Wayne Rooney will be included in the starting XI let alone even on the bench. With Rooney apparently pushing for a move just as much as Mourinho, it’ll be interesting to see what Moyes’ plans are for Rooney at Old Trafford.

Notables to miss Monday’s encounter with Chelsea are Nani (groin), Ashley Young (ankle), Javier Hernandez (hamstring), Rafael (hamstring / suspension) who looks to be out for four weeks. Without a full squad to choose from, the red manager does have a solid side to form against what will likely prove to be their toughest opponent in the league. Although Manchester derby’s are invigorating and chalk-full of history and drama, beating “The Special One” is always a prize. We can think of no better way to welcome Moyes to Old Trafford as our manager, than by receiving three points and sending the Blues back to Stamford Bridge empty handed.

The task is daunting however, as Mourinho’s squad is teeming with talent so much so that he has absolutely no qualms with leaving David Luiz out of his plans. Granted, Barcelona seem to be in talks with the Brazilian, Luiz does not seem to fit into Mourinho’s plans as more often than not he surges forward rather than tends to his defensive duties. Luiz aside, the midfield for Chelsea is stunning – Eden Hazard, Frank Lampard, Victor Moses, Ramires, Oscar, Schurrle all have the ability to change a match, which hopefully they’ll neglect to do Monday. Furthermore, as Juan Mata looks a non-factor through the first two league matches of the season, curiously sparks as to whether or not Mourinho will keep hold of the Spaniard.

As Mourinho looks to take nine from nine in the Premier League, Moyes’ boys have other plans. With van Persie leading the attack, the Scot would be hard pressed to place Shinji Kagawa underneath van Persie, or even Wayne Rooney. United will likely place Antonio Valencia and Ryan Giggs in the midfield along with Tom Cleverley and Michael Carrick. Without question, Carrick’s involvement Monday will likely be the motivating factor between the midfield to the defense and forwards. If Giggsy and Valencia can create plenty of service into the box, Moyes may very well walk away with a pep in his step, and three points in his back pocket.

The Portuguese managerial mastermind made his debut as Chelsea’s manager some nine years ago, against United. On that day, the Blues ran away with a 1-0 victory at Stamford Bridge – this year, it’s a new story. As Mourinho makes his return to the league, this time he steps into the glorious home of Manchester United, and the support of both club and Moyes will be escalated. United have begun their pursuit of their 21st Premier League title, and with Citys slip up against Cardiff City, it looks evident on matchday two that United and Chelsea will likely press for the crown.