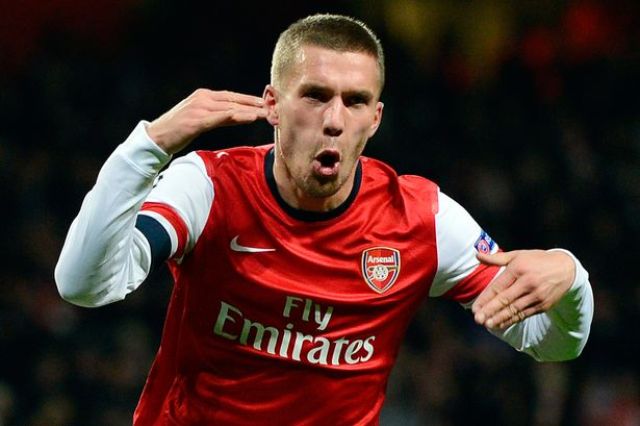 All summer Arsenal have been linked with various strikers, yet signing none of them. This has left the fans disgruntled and had critics writing the Gunners off for the title and even for a top four place only two games into the season. This is largely based with the Gunner’s current crop of forwards quite simply not providing enough goals last season. None of Arsenal’s forwards hit more than 15 Premier League goals, whilst Giroud and Podolski only scored 11 apiece. Arsenal fans have every right to be concerned with this lack of goals from their forwards, especially as they were forced to watch Robin van Persie bag 26 for rivals Manchester United. However, whilst Arsenal’s squad certainly needs strengthening, Gunner’s fans may want to give their forwards another chance. Giroud and Podolski both scored as Arsenal dispatched Fulham 1-3 on Saturday and have now scored five goals between them in just three games, with them both carrying their great form from the tail end of last term into the new season. Both of these players have scoring pedigree; Giroud hit 25 goals the season prior to moving to Arsenal and Podolski managed 18, both for teams that create fewer chances than Arsenal do. The pair has not shown this scoring ability in their first season for Arsenal, but Podolski and Giroud have looked rejuvenated so far this term, and Wenger may already have the solution to his striker dilemma. Arsenal will also have young forward Yaya Sanogo this season. The free transfer of Sanogo has been often derided by the press and fans this summer, becoming the target of peoples’ frustration at Wenger’s lack of spending. However, the Frenchman is only 20 years old, yet managed to score 10 goals in just 13 appearances for Auxerre last term and could surprise a few people for Arsenal this season.

It is not just Arsenal’s strikers that have appeared rejuvenated at the start of this season, although there is still a connection with the Gunners. Darren Bent threw off the spectre of his nightmare season at Aston Villa last term to bag a goal against Arsenal on his Fulham debut. Even during his time at Villa Bent managed to maintain an average of better than a goal every three games, but Fulham fans will hope that a rejuvenated Bent can return to the form of better than a goal every other game which earned him his £18million move from Sunderland to Villa in the first place. Another Arsenal connection saw ex-player Marouane Chamakh score during his first start for new club Crystal Palace. Chamakh’s career has gone wayward in recent years. After making a blistering start to his career at Arsenal in the 2010-11, but his form faded in the winter months and the rest of his time at Arsenal was relegated to substitute appearances and the occasional Cup game cameo, only interrupted by an unsuccessful loan spell at West Ham. Prior to moving to Arsenal, Chamakh had hit 16 goals in two consecutive seasons for Bordeaux, winning the Coupe de la Ligue, twice claiming the Trophée des champions, and most impressively breaking Lyon’s monopoly on the league to fire Bordeaux to the2008-9 Ligue 1 title. Chamakh obviously has quality and Palace fans will hope his goal on Saturday will be the start of a comeback season for the Moroccan. Elsewhere, Manchester United fans will be hoping that Welbeck can continue his great start to the season against Chelsea on Monday night; the forward has already doubled his Premier League goals tally from last season with a brace against Swansea last week.

It has been a busy week for Chelsea, with outspoken boss revealing on Friday that new signing Willian had chosen Chelsea over London rivals Tottenham. It had looked like Spurs had all but captured the Brazilian from Russian club Anzhi Makhachkala before Chelsea intervened. Whilst this poaching is a little naughty, it does give Tottenham a taste of their own medicine, who stole Clint Dempsey from under Liverpool’s nose last term. However, what makes this piece of transfer naughtiness even more suspicious is the host of other attacking midfielders Chelsea already have at their disposal. Chelsea have made enquiries  over Willian repeatedly in recent seasons, but have always opted for other options, such as Willain’s compatriot Oscar and Belgian pair De Bruyne and Hazard, so it seems odd that Abramovich has chosen now sign his man. The whole affair does seem to be more about preventing Tottenham from strengthening, with Abramovich flexing his financial muscles in a real statement of intent on by Chelsea. André Villas-Boas is understandably annoyed by this, and he isn’t the only Premier League manager disgruntled by the transfer behaviour of another team. Newcastle manager Alan Pardew has added his voice to the chorus of dissenters protesting that the transfer window should end before the start of the season, with Pardew upset by Arsenal’s pursuit of Yohan Cabaye. Arsenal made a £10million bid for the French midfielder on the eve of the Manchester City game. The bid is obviously not market value for the talented playmaker and seems designed purely to unsettle the player ahead of an improved offer. This ploy seems to have worked, with Cabaye not fielded against City due to his mind set and also missed the West Ham game on Saturday after reportedly refusing to play. With PSG now also reportedly in the market, Newcastle will likely be resigned to losing Cabaye, however they are understandably disappointed by other clubs manoeuvrings to disrupt the player and knock down the asking price.

The transfer window has created much controversy recently, with calls to shorten it, cut the January window, or even scrap the whole system have been made. Calls to scrap the window are ridiculous; a completely free market would lead to even more disrupted seasons, with big clubs swooping for players whenever they like which was one of the reasons the window was introduced in the first place. The other option, a completely closed market, where players can only leave at the end of their contract, or if released is also unfeasible and would never pass European employment laws and regulations. However, the window is obviously in desperate need of restructuring to prevent such ridiculousness as the Cabaye situation. In other news, Manchester City, whilst behaving themselves, have been up to their own transfer nonsense. All summer, City have been linked with a move for Real Madrid centre back Pepe. Nothing has materialised, with the clubs reportedly too far apart in their valuations of the player and Manchester City have now turned their attentions to Real’s city rivals Athletico and veteran Argentine Martín Demichelis. With reported fees of between £1-5million, one could be forgiven for thinking that this was at last some sensible business by City in contrast to the astronomic fees they have been paying, until one finds out that Demichelis was available for free just a few months ago. The farce doesn’t end there either, with Athletico reportedly ready to move for Monaco midfielder and defender  Jérémy Toulalan, who like Demichelis left Malaga on a free earlier in the summer, and like Demichelis, could now move for the second time in one window, this time for a free.