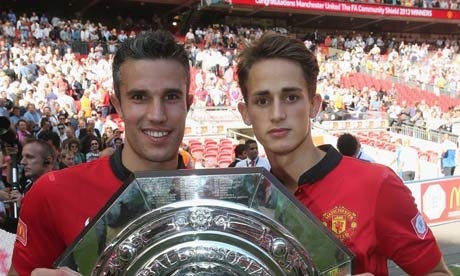 Imagine you are gifted enough to ply your trade at the esteemed Manchester United academy, the place where legends have been made and will continue to do so. Then imagine the greatest manager to have ever lived genuinely signing your praises in his curtain call year. ‘Adnan is our future’ said Ferguson. Having the talent is one thing, getting that lift and confidence to transfer that talent into match situations is another. A level-headed professionalism is another must. A young Belgian called Adnan Januzaj has all these ingredients.

The hairs on the back of his neck will have stood up having heard Ferguson’s bold prediction that he will meet greatness on his long footballing path. The good news for United fans is that seemingly his long-term future is under David Moyes’ tutelage.

Talk of a new deal was first touted in May, immediately after Sir Alex’s retirement. This obviously was a sticking point, Adnan would have been keen to get the assurances that David Moyes saw him as a part of his plans, something which led to Europe’s big guns sniffing for a bargain.

“We know Adnan is on the list of many clubs,” Devriese revealed. “Including Juventus and Barcelona. It’s no surprise that other teams are interested but Sir Alex told Adnan a few weeks ago that he can play in three different positions in midfield. They have worked hard on his weak points.

“We’ll talk about a new contract in a month – his current one is expiring in 2014. Sir Alex’s retirement has delayed the negotiations but, if everything goes well, Adnan will stay a few years longer at Old Trafford. The club rewarded him with a squad number and he will be part of the first-team squad next season.”

Januzaj made his breakthrough this pre-season and turned heads. He impressed on tour and then was United’s best player in Rio Ferdinand’s testimonial defeat to Sevilla. He then made a brief cameo in Moyes’ first trophy success- the Community Shield victory over Wigan. This has given many hope that Januzaj will feature prominently in the season ahead, especially given the lacklustre performances of our wingers last year.

I went to the Salford City Stadium on Monday night, the new home of our Under 21s, to check out their first match since clinching the elite development title at Old Trafford. Despite being beaten to a very strong Liverpool outfit, Januzaj’s performance stuck out like a sore thumb.

He reminds me of David Silva and in many ways, going back down memory lane the Ryan Giggs that started his career. Both left footed, slight in posture, they all seem to have the uncanny knack of being able to glide when in possession- what I mean is they effortlessly take on their man and beat them and have that graceful air on the ball.

In the form of Januzaj and the acquisition of Wilfried Zaha, we boast two of the best young wingers in the country with boundless potential, they will be what they want to be. Adnan, in particular, will save us writing some nasty cheques in the future.

Januzaj will reportedly sign a new deal tying him down until 2018, safeguarding our future and shoring off interest in our best youth product in the process.

The youngster’s new contract will stop a worrying trend of young talent going through the exit door in recent years. In the last two seasons, Zeki Fryers, Ravel Morrison and Paul Pogba for various reasons chose to fly the United nest.

Unlike those three, Januzaj has the temperament and is level-headed.