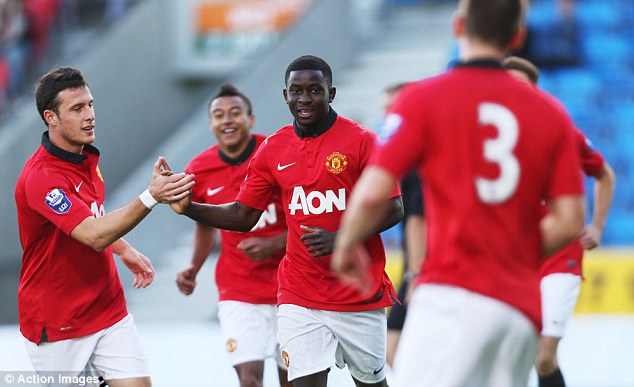 The United under 21 side have a new home this season, having made Altrincham’s Moss Lane some sort of fortress last season, they started the defence of the elite development league at the Salford City stadium, primarily a rugby venue, against bitter rivals Liverpool.

Both sides fielded strong lineups – Ben Amos, Henriquez, Januzaj and Lingard all featured in pre-season for United, whilst Liverpool started Fabio Borini and Jorden Ibe, who were both on their bench against Stoke on Saturday and ultimately proved to be the difference.

Larnell Cole, whose two goals clinched the title last year against Tottenham at Old Trafford, got the under 21s first goal of the season with a left-footed shot from close range which took a deflection on the way in on 7 minutes.

Liverpool swiftly equalised, Ibe left debutant Guillermo Varela for dead, on a difficult eye-opener for the Uruguayan, and finished off a brilliant solo run.

Adam Morgan gave the visitors the lead, punishing a slack bit of defending from Michael Keane, who did not have the best of nights.

Borini, who was one of their over-age players, scored a Cristiano Ronaldo esque free-kick moments later, the ball swerved late although Ben Amos will have been disappointed to concede from range.

Warren Joyce’s men are not averse to comebacks, having fallen behind in the elite final in May, we reduced the arrears before half-time in what was a frenetic first-half. A flowing move involving calm possession and slick movement was coolly finished off by Jesse Lingard, who carried on his impressive scoring form from the tour.

United edged the second-half play, however despite the brilliance of Adnan Januzaj, who is going to become a star for United, the Liverpool defence would not be breached again, mainly due to the nous and experience of Martin Kelly, their other over-age player who donned an Andy Carroll like ponytail, I think they miss the big geordie already.

Borini notched his second of the game, again punishing woeful United defending, capitalising on a under-hit back pass, rounding the helpless Amos and ending the game.

In the end, it was a fiercely contested game with not much to separate the two sides. Ibe wreaked havoc, giving Guillermo Varela a taster of what English football is all about. Januzaj was similarly destructive at the other end, but it was not enough.

The reds will need to dust themselves down and quickly, their next match is at the Hawthorns on Friday against West Brom, which is a 2pm kick-off. There is much for Warren Joyce and Nicky Butt to ponder, for all our promising attacking intent was dented by naive and shoddy defending.

Ben Amos- A few good saves in between a Borini free-kick he could and should have saved, distribution occasionally wayward. He will have better nights. 5

Marnick Vermijl- Solid left-back in the first-half turned into awkward centre-midfielder in the second. Not spectacular but not bad either. 6

Guillermo Varela- A tough introduction into English football, Ibe ran him ragged and didn’t give him the chance to show off his attacking qualities. Looks lightweight and raw. He will of course improve, but it was a rude awakening. 5

Tom Thorpe- The captain gave a performance fitting of the armband. Strong in the air and adept on the ground, United’s best defender tonight. This lad has plenty of promise. 7

Michael Keane- Didn’t cope well with Borini, often wasteful in possession and culpable for two of their goals. Improved performances are a must. 4

Charni Ekangamene- Didn’t really provide the defensive shield or support to Davide Petrucci and Larnell Cole. Unfortunately, we lost his grit and aggression to an injury and was subbed at half-time. 5

Larnell Cole- Provided the odd bright spark and was generally lively without seeing too much of the ball. We didn’t see the best Larnell Cole tonight but much to build on. 6

Davide Petrucci- Grew into the game after a quiet beginning during which he was wasteful. His passes found men in the second half and got stuck in. Not quite at his creative best. 6

Angelo Henriquez- Showed endeavour and tenacity but was feeding off scraps. Tried hard tonight but rarely got the chances in front of goal. 6

Adnan Januzaj- United’s best player by a considerable distance. He had their full-backs on toast and his trickery and pace deserved better and a goal. It’s only a matter of time before he is in David Moyes’ match-day 18 for good. One of United’s best young talents to come through the system in recent years. We need him tied down sharply. 8

Jesse Lingard- Carried on his pre-season form and once again demonstrated his eye for goal with a tidy finish. Combined industry with some clever interchanges and ticked possession over. 7

Tom Lawrence- Replaced Henriquez but struggled to get into the game and was sloppy in possession. 4

Tyler Blackett- Replaced the injured Ekangamene and gave us an attacking outlet down the left, his pace and power caused problems. A real unit in full flight, this cameo was very encouraging. 6