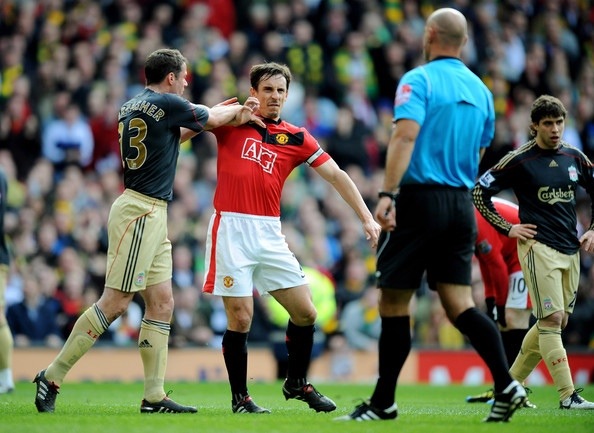 Who’d of imagined ten years ago that both Gary Neville and Jamie Carragher would sit alongside one another and analyse football. Now both former players have turned pundits for Sky Sports, both the ex Manchester United and Liverpool men have done spectacular jobs. As both clubs were bitter rivals especially during the heat of their professional careers, Neville and Carragher are better than the media reporters. Often times Neville and Carragher have been pinned against one another in the media ‘How on earth can those two rivals work together’ or ‘Those two will never see eye to eye.’ To answer those questions in the shortest words possible: Easily, and often.

Not surprisingly, both former stars still are as opinionated as ever but, both Neville and Carragher find a way to make it work – and do so quite well. As Neville has been around as a pundit a bit longer than Carragher who has only been retired since this past season, both offer unique insights. Both excel at Sky Sports not only because of their immense knowledge for football, but because they both seem down to earth. Despite being highly touted footballers during their time for both club and country alike, differences aside – both are now highly regarded in the world of football commentary and broadcasting.

Two fierce rivals during their playing days, believe this on-air partnership benefits them but also those tuning in. Neville stated “Part of the appeal is that we were such rivals for so long. It’s what the show needed. I was conscious we had to keep moving it forward and I’m sure in another two years we’ll be saying ‘How can we change it again?’ You can’t become too comfortable, just like a successful football team.” Rightly stated from the former red – commentary is much like football: when matters are going good, the manager stays in charge. When matters begin to sour or become too dull, a sack is in order – but do not expect either Neville or Carragher to step aside anytime soon.

Carragher added “We’ll disagree but you have to be careful. We have strong opinions on the game but a lot of the time we’ll agree.” Last season on Monday Night Football, Neville was brilliant with insight and analysis. His ability to understand Manchester United is obvious; however, his thoughts were extremely fair and unbiased even when it came to the likes of City, Everton, and Arsenal. Both bring a few funny tidbits of information and note that their mockery is all in good fun. Recently Neville described Robin van Persie’s attacking prowess as a “burglar in your house” to which Carragher quick spat back “You’d be under the bed.” Per usual, the Manchester United man had the last laugh and stated with that cheeky smile “And you’d probably be the burglar.” While some would have thought Carragher would have instantly frowned, the light-hearted nature between the two just saw the former Liverpool defender smile and brush the joke aside.

It is exactly that brief bit of comedic relief which makes both Neville and Carragher stunning. They know how to get the business side of the game out, while also discussing a fair and unbiased approach to football. And even though we may see a few unsettled with their partnership on air, the budding partnership is nothing but a positive one. The only problem is Joey Barton who keeps complaining about Carragher’s accent – well, Barton faired well in the Premier League, didn’t he? At least Carragher’s accent is genuine, unlikes Barton’s fake French accent after one match in Ligue 1.

Simply put as Carragher said best “We’re passionate.” When a footballer, retired or active, is passionate about something – their whole heart goes into it, and that’s exactly what we see with Neville and Carragher.