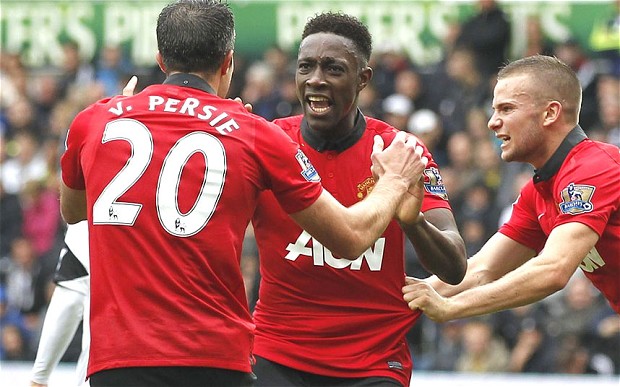 When 4 of our defenders (Rafael, Evra, Evans and Buttner) all usurped the goal tally of a young man whose bread and butter should be dealing in goals, the cliched and rash label ‘donkey’ was handed to Danny Welbeck. A solitary Premier League goal and a chance conversion rate of a pitiful 4% meant last season was bittersweet for the born and bred Mancunian. Personally, that return was not simply not adequate, collectively the season closed with a Premier League title- the pinnacle especially for a United fan through and through.

Of course, we are not blind to the fact that Welbeck’s miserly return last year was his main Achilles heel. Things were not helped by Sir Alex’s insistence that Welbeck’s infectious work-rate would be best served out wide to develop his all-round game. Welbeck flourished the season before in what was a breakthrough campaign. Forming a fledgling and promising partnership with Wayne Rooney, many stating that their linkups were akin to the devastating rapport Andrew Cole and Dwight Yorke had in that Treble season.

Having seen Welbeck score a pearler past his Everton side during that campaign, Moyes saw first-hand how potent Welbeck could be deployed in a role down the middle alongside another striker and his eye for goal. We saw glimpses of that yesterday.

Following that Champions League exit against Real Madrid last year, Welbeck famously took the place of you-know-who and was arguably our best player in both legs. For all the politics behind Rooney’s omission, Welbeck’s displays showed that he deserved to grace the field on merit on the biggest stage, and he left nothing on the pitch.

Around that time, those criticising his goal shyness were sharpening their knives. I, for one, was quick to defend the Longsight born striker believing that the goals would come with more first-team experience and as he matures as a footballer.

Rome was not built in a day, at the very heart of the United ethos that has stood the test of time is the patience afforded to the club’s youngsters as the long-term rewards would be untold, no better example of this was Eric Harrison’s Class of ’92. Doubts lingered over Gary Neville’s height and talent, Paul Scholes was slight of frame and hindered by his asthma and David Beckham’s stature was also questioned and was even shipped out to Preston on loan in what was seen as ‘make or break’. The perseverance shown in nurturing and putting faith in the trio was truly vindicated and shown by their legendary status as United heroes.

Adhering to general consensus, Welbeck has all the ingredients required to become a major force to be reckoned with- he is a physical specimen- pace, strength and industry personified. As already touched upon, once Welbeck finds his shooting boots week in week out, just imagine the end results.

Danny Welbeck in full flow is a serious prospect. He is very much a confidence player, once he stays composed in front of goal and eradicates those occasional gangling, awkward touches we will see an improved goal return to compliment Robin Van Persie’s ferocious firepower. Welbeck poached his first goal of the season inside the six yard box, these predatory instincts need to become the norm for Welbeck instead of hugging the touchline- that is not the Danny Welbeck going through the age groups at United. That goal led to a new-found confidence, and he must have been brimming when he pulled off that sublimely outrageous chip to clinch the win in stoppage time. Hearing Robin Van Persie, the second of yesterday’s deadly duo, say that Welbeck has everything and will only get better will have been music to his ears, high praise from the league’s deadliest striker.

The early signs have been very encouraging, with a well-taken header for England followed by yesterday’s brace. There is no bigger buzz for us fans to see our homegrown fruit making names for themselves, ‘Super Dan’ as he has been christened is a fans favourite for many, everyone loves a trier and Welbz is certainly that.

Yesterday was much like the Real Madrid game, when Wayne Rooney naturally grabbed all the media attention, it was water off a duck’s back to Danny and he delivered. Youth is worth investing in long-term, last year’s travails will be forgiven if Welbeck kicks on and delivers goals consistently.

Hopefully yesterday were the first small steps to a much-improved, clinical Danny Welbeck.