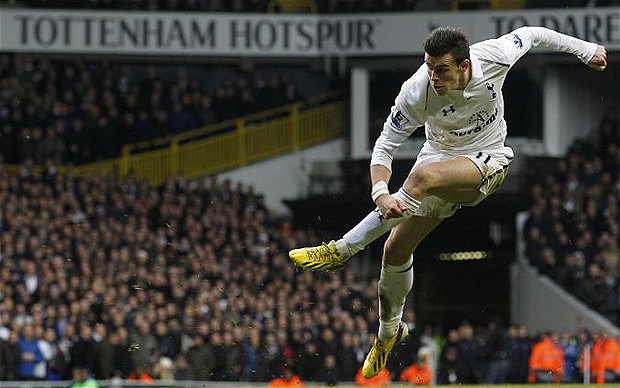 For the past few weeks English football has been dominated by three want-away figures; Gareth Bale, Luis Suarez and Wayne Rooney. None of these players started for their teams this weekend, and all of their respective clubs fare quitted well, while those in pursuit faltered a bit. It will be interesting to see if this weekend’s results have any impact on whether these transfers happen, how quickly they happen, and what fee they command. First, let’s start with Bale.

Bale has been linked with almost every big European club – seeing interest from Manchester United which never materialized into anything tangible, whilst Barcelona moved for Santos star Neymar. Subsequently this left Real Madrid as the sole courter for the Welsh winger, for now. Bale’s highly touted move to Madrid has attracted much debate, with much of the focus surrounding the Welshman’s price tag of £100 million.

Whilst it is debatable if any player is worth tens of millions of pounds even in the ridiculous world of inflated transfer fees, £100 million for a player who only has two truly great seasons under his belt is bound to raise eyebrows. Even despite the huge sums being thrown around, Daniel Levy and Tottenham seem determined not to sell, and many have criticized the move as a poor one for Spurs due to their reliance on Bale. For the past two seasons, Spurs have been unable to throw off the ‘one man team’ tag, and their performance against the newly promoted Crystal Palace shows that. Despite a 1-0 victory, Spurs looked toothless without the injured Bale, winning only thanks to a controversial penalty converted by new man, Roberto Soldado.

What was obviously for all to see from Tottenham’s performance against Palace was that they’re not the same team without Bale. What Spurs need now is for Chairman Levy to act; if he does choose to sell, he needs to do so now. Haggling until the last minute and then panic buying wasn’t effective when Levy did it with Modric, or with Berbatov, and it certainly isn’t the way forward now. Tottenham will need time to reinvest if they are to sell Bale and still qualify for the Champions League. The alternative is, of course, to hold onto Bale; a decision has to be made quickly.

Next up, Luis Suarez; the man, the legend, the idiot. All of Liverpool’s pre-season build up has been dominated by the Uruguayan, as he was courted first by Madrid and now by Arsenal. There’s no doubt the striker is a world class striker, and Liverpool can be forgiven for doing their utmost to try and hold onto the man who hit 30 goals for them last season. However, at the tail end of last season, with Suarez out suspended, yet again, for a bite, the second of his career, Liverpool proved that they don’t need the maverick to score goals; in fact, Liverpool actually scored more goals last season without Suarez in the side.

On Saturday, Liverpool again won without Suarez against Stoke. Whilst a 1-0 win against Stoke, with Liverpool relying on new keeper Mignolet to save a late penalty (Jonathan Walters missed yet another spot kick. Seriously, why does he still take Stoke’s penalties), may not seem an impressive performance, that assessment flatters Stoke considerably. Liverpool were fantastic against the Potters, with new signing Iago Aspas slotting in comfortably with the formidable partnership Sturridge and Coutinho formed after January last term. Stoke were lucky not concede four of five, as the fluid trio carved them open time and time again, as Liverpool proved yet again that they can cope just fine without Suarez.

The club chasing Suarez on the other hand made a nightmare star to the season, with Arsenal falling to a 3-1 defeat at the hands of a rejuvenated Aston Villa. This may very well spark Wenger into being a bit more assertive in his pursuit of Suarez. However, whether Suarez would really be the solution to Arsenal’s problems is extremely debatable. Suarez provides excellent build up play, but he is selfish and creating chances has hardly been the Gunner’s problem; on Saturday Arsenal carved Villa open on several occasions, with Tomáš Rosický in particular spurning an excellent opportunity. Finishing has been one of Arsenal’s problems, and despite an excellent return last term, Suarez does have a habit of needing several chances to score.

Furthermore, despite what many Gunners fans may claim Arsenal are not one marquee forward away from being a title winning side. Arsenal have good players in every position, but therein lies the problem, good side is not a great side, and against the better teams, especially in Europe, the Gunners’ were often caught out. Regardless, Liverpool manger Brendan Rodgers has stated that the Suarez situation has been ‘resolved’, with the troublesome Uruguayan seemingly now staying at Anfield. No doubt Arsenal fans will have cast a jealous eye towards Manchester this weekend. As Arsenal must now find new transfer targets before the window slams shut in two weeks’ time, their old hero Robin Van Persie was doing what doing what he does best, netting two in the champions’ 4-1 win over Swansea.

Wayne Rooney to Chelsea has perhaps been the most surprising of the summer’s transfer stories. What started as Rooney expressing some disgruntlement at his playing time last season was aggravated by accusations of a transfer request by Sir Alex Ferguson and has led to many touting a move as inevitable. Fueling the transfer rumors has been Rooney’s lack of fitness, meaning he hasn’t featured much in preseason and missed last week’s Community Shield. However, despite operating somewhat in Van Persie’s shadow last season, Rooney came on with half an hour to play during Saturday’s showdown with Swansea to show his quality and set up two goals.

Moyes and the club have repeatedly reiterated that Rooney is not for sale, and if the reds can finally resolve the dispute surrounding Rooney’s position and playing time, then they have a truly world class player at their disposal. This is a move that is looking less and less likely, as well as Manchester United’s unwavering stance that he is not for sale, it is not as if Rooney’s main chaser Chelsea need him, at least not enough to pay the huge amount that United would likely demand. Chelsea were fantastic in their 2-0 victory this weekend, dispatching the newly promoted Hull with remarkable ease. Mourinho has stated that he is still in the market for a striker, but it looks unlikely to be Rooney.