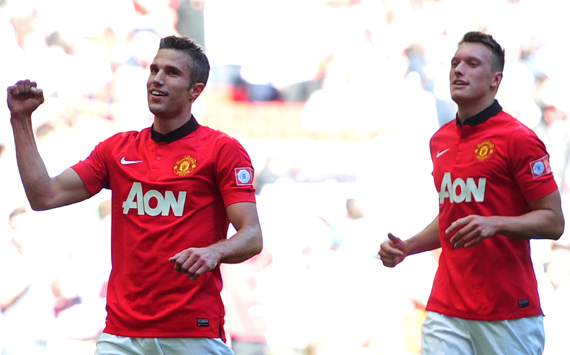 Sir Alex Ferguson got to the point at times where you could predict his unpredictability. His time at the helm meant that you always knew when a ‘Rooney left wing’ or a ‘Jones in midfield’ would jump out from a team sheet an hour before kick-off. Picking the best players in a 4-4-2 formation was almost unthinkable. There was always a twist, a formation change or a bombshell.

Under Moyes, who knows what will become our best eleven. Will we be able to go from chastising the selection of two full backs as wingers in an FA Cup tie to basking in the tactical brilliance of a managerial piece of genius 90 minutes later?

For this first part of Moyes’ Old Trafford reign, I will try and make some predictions of what could happen. If you look at the first three fixtures, to me at least, Swansea was the absolute must-win. Winning that game was a tremendous achievement. Yes it’s only Swansea, but they are a decent side and if United failed to register three points the knock on effect could be massive.

All of a sudden the visit of Chelsea would take an ugly (or uglier) turn if we’ve drawn at best our opening fixture. Suddenly, the Moyes who relied on teams to be stubborn and dogged would come to the fore and our approach to Chelsea and subsequently Liverpool may be a ‘must not lose’ scenario in which we rarely achieve that very objective.

You feel that Mourinho’s eyes would widen at the thought of a five/six-point gap after two games and they would be flying at Old Trafford following their usual opening day demolition of a piss-easy home fixture.
Then we go ‘there’. If we were able to turn up at Anfield with four points already tucked away I’d be extremely satisfied. Why? Because it would be the same number of points we amassed from the corresponding fixtures last season when we played Swansea, Chelsea and Liverpool; essentially giving us free reign to have a right good crack at the scousers.

You can’t go through a season making every game a comparison of course, but for Moyes’ first few weeks of competitive action it could be a good gauge of how the team is doing. It could also provide a reality check for supporters should we stagger our way through our opening three games to be reminded of the four point mark we hit in the same three fixtures last term.

So Swansea is crucial. The Chelsea game on the Monday allows sufficient rest for the likes of Rio and Vidic who I believe will start all three games at the heart of the defence. After Liverpool, it’s a weekend off followed by Palace at home when messrs Smalling and Evans can get their first league starts of the campaign.

I reckon, Moyes has 14 players in mind. Fifteen if you count Rooney. That’s 14 players to make a starting appearance in those three games. It’s what Moyes knows best, working with a small squad and I highly doubt he will get giddy and be utilising 18-20 players for the first time in his managerial career so early on. There will be more players who make appearances from the bench, but the starters will be fairly small in number.

Navigate these games and then you have a free weekend and the Palace game to properly assess the squad players. It will be a case of going for experience. A doubt Zaha will start a game before Palace provide the perfect opposition for him to make his full home debut. Reports suggest he likes Anderson but I believe the Brazilian pie-eater will only be used from the bench.
The 14 players I believe he will use are:

On that basis I’m going for Jones to be given the full back spot away at Swansea before a possible ‘Mata Mission’ the following week meaning Fabio comes in. Cleverley may well start on Saturday but the next two games I’m unsure, particularly Anfield.

I surprised myself naming Young but I believe his energy will see him get the nod in at least one game. He and Valencia would be the ideal work-horses for a Moyes starting eleven intent on pressing high, which you could imagine against a team like Chelsea who shouldn’t be allowed to play.

Kagawa may have to wait a couple of weeks before the Liverpool game comes around for his first start. Two weeks to get himself fitter and sharp for a game where his ability to find space in tight situations could see him thrive with the playmaker better equipped to deal with the atmosphere having played there last season.

Who knows if our own scouser will be involved. I’m planning for the worst case scenario in any case and this ‘squad’ could be blown to bits should signings start to materialise. Injuries can have their say as well, I know, but I firmly believe that Moyes will rotate that small group of players in the hope he can gain at least five points. That way, he would have done better than his predecessor last season and maybe crucially, done it without Wayne Rooney.

One response to “Staring into the crystal ball….”