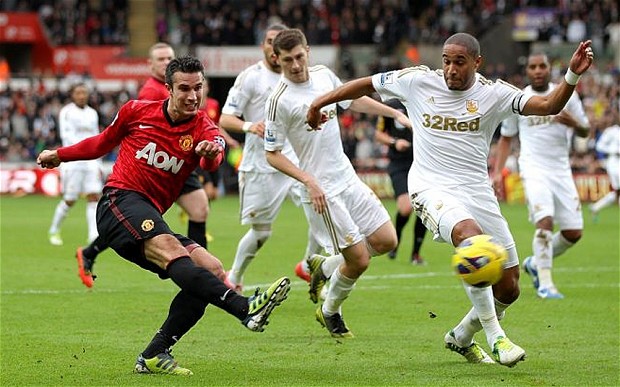 Buckle up, the title defense is on. Manchester United open their 2013/14 Premier League account in South Wales on Saturday evening (August 17th at 17:30 BST) at the Liberty Stadium. After United took down Swansea City in their final home match of their 20th title campaign, the last of its kind under Sir Alex Ferguson, Michael Laudrup’s side will look to extract every ounce of effort from our reds. The Spaniard Michu, and new signing Wilfried Bony could combine perfectly to challenge our defense; however, with Rio Ferdinand and Nemanja Vidic well rested, fully expect a sound opening account from United.

Even though Sir Alex told us to stand by our new manager just as we had to him during his 27 years in charge in Manchester, obtaining three points against the Swans would be a huge sigh of relief to reds worldwide, and especially David Moyes. The man under the microscope embarks in his inaugural season in charge of the worlds biggest club against an attacking minded Swansea side, led by a manager with plenty of intent. Winners of the Capital One Cup, new signings of Bony and former Liverpool man Jonjo Shelvey, indicate Laudrup’s squad are ready to also continue on last seasons success.

In terms of injuries, Swansea’s Jonathan de Guzman will miss his sides first Premier League match due to a concussion. On the other side of the token, Michael Carrick was kept out of England’s thrilling 3-2 victory over Scotland due to an eye infection, but likely he will get the nod in the center of midfield. Per usual, Carrick will look to dictate the tempo of the match and spray telling balls to Robin van Persie and Danny Welbeck. After securing last seasons Golden Boot award in the league, his two goals in United’s 2-0 triumph over Wigan Athletic in the FA Community Shield could be a clear indication that the Dutchman shows no signs of stopping his fine form anytime soon.

With Carrick likely to return, United may have another concern in their right-back duties. Rafael will not feature due to injury, therefore allowing Phil Jones to assume his versatility role within United. Much like John O’Shea during his time with the reds. Personally, Jones may be best suited as a center-back or defensive midfielder in Moyes’ squad, being called upon to step up to the plate is something that the Englishman does not shy away from. And of course, a few of his silly faces will be in order for those wondering.

According to NBC Sports, this is United’s first match that Ferguson was not in charge, in 1,046 matches. As the astonishing managerial reign has since ended, Saturday evening is the beginning of another managers legacy in Manchester. With three points on Moyes’ mind, the Wayne Rooney debacle hopefully will not distract the squad from a stellar performance. Rooney’s inclusion remains to be seen, and although a place in the starting XI looks obsolete at the moment, will the Scot throw the 27-year-old on the bench for a pending emergency? After 65 minutes against Scotland (despite the apparent shoulder injury) his reception with United fans currently lays in the balance as to whether or not he’ll be accepted. Without question, if he in anyway leaves a mark in terms of scoring a goal – we may just see a smile from Wazza.

In preparation to the match, Laudrup stated “It’s never the right moment to play Man United because there is always quality. I could sit here and say it’s the best moment you can play Man United or top team like that and we lose 3-0 on Saturday.” The Swans will not be afraid to attack United with venom, while United will do the same. Moyes’ boys could rely on Welbeck to continue his immense work rate allowing extra room for RvP to maneuver. At the same time, Antonio Valencia and Ashley Young could get the nod for United, as it’s crucial to ease in the younger players of Wilfried Zaha and Adnan Januzaj. If for one second the Scot believes Zaha could make a bigger impact with his pace and raw talent, I wouldn’t expect him to think twice.

This is the moment we’ve all been waiting for. Nemanja Vidic and Patrice Evra passed the Premier League crown to Fergie in what seems to be only yesterday. Now, with a few management changes made to the Manchester outfit, the mission remains the same – conquer the football world, one team at a time.