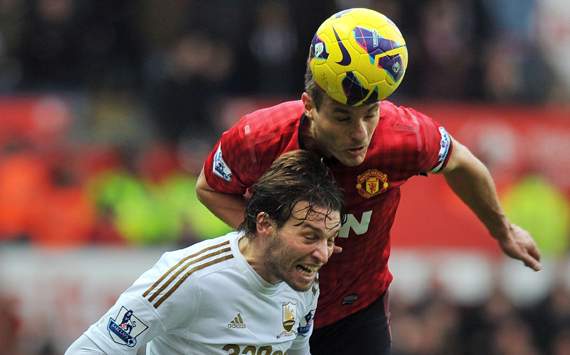 Scott Mackay, from Swansea blog The Swansea Way, has taken some time to discuss his feelings on Swansea last season, his thoughts on the rivalry with Cardiff and his ambitions for 2013/14, amongst other things. Follow The Swansea Way on Twitter.

Swansea finished ninth in the league and won the Carling Cup. How did you rate the 2012/13 season?

Pretty unbelievable really. We produced wins over some big teams, and obviously qualified for Europe by winning the League Cup. For a fan who grew up watching the Swans in the Football League basement playing in front of a few thousand fans, it’s hard to believe what’s gone on in the last ten years.

Everybody was impressed with Michu. Are you surprised Swansea have managed to keep hold of him?

Not really, to be honest. Ok, he excelled last season, but he’s not your traditional forward, and Swansea’s way of playing is so markedly different to most British teams any manager pondering making a bid must also have serious doubts as to whether Michu would adapt to a new playing style as well as he did to the Swans’. There’s now some talk about Arsenal making a bid, but Swansea’s secure financial position makes them a formidable sparring partner in the transfer market, and I’d be really surprised to see us let him go for much short of £25million, given factors such as the lateness of the hour, Swansea’s lack of a need to sell and Arsenal’s desperation to bring in a player who will appease their increasingly frustrated support.

Ashley Williams. The Swansea defence just keeps improving, and in Chico Flores he’s found a partner who I believe will help form one of the best central-defensive partnerships in British, and European football. The statistics spoke for themselves last season; Williams made more blocks and interceptions than any other player, and he’s really excelling at the moment. His longevity is remarkable too – he’s only missed (I think) three games since joining the club in 2007 and the guy really is a monster at the back. As Robin Van Persie knows…

How do you build on cup success at a club like Swansea?

Continued sensible development. The club have recently opened a new training base a stone’s throw from the stadium (and, luckily, where I work!), and work is ongoing at another base, further out on the Gower peninsula, which will see them develop better links with Swansea University. The signing of Wilfried Bony shows the club are willing to push the boat out if we’ve got the money to do so – but that’s the crucial factor. You can bet your bottom dollar that despite spending circa £20million in the transfer market this summer, our balance sheet is still in the black, and it’s recently been announced that we’ve strengthened links with the Supporters Trust, who continue to enjoy a 20% stake in the club.

You have signed a mouthpiece in Shelvey. Will he improve the Swans or be a bit-part player like at Liverpool?

I’ll hold my hand up and say I was really not enthused about this one at first. I actually saw Shelvey play in one of his first games for Charlton – Swansea’s first game in the Championship away at Charlton – and I didn’t have any kind of recollection of him shining, and coupled with what I’d seen from him at Liverpool I thought £5million was a lot of money. That was, until a friend pointed out you’d struggle to find a young British midfielder who would realistically expect to challenge for a first team place for less than the aforementioned fee. When you look at how he’s performed so far, I can honestly say I currently expect £5million to look like a bargain come May.

If you could take two United players, who would they be?

David De Gea and Shinji Kagawa. De Gea was generally excellent last year I thought, and he’s still so young he’d have at least a decade of top level football to look forward to. Another Spaniard would be mental though! We’ve already got more in our squad than Malaga apparently! Kagawa is a player I rate massively, and I’m expecting big things of him pre-season. I thought he looked lively in your Charity Shield match again Wigan, and hopefully he can make more of a mark than he did last season.

Do you think Moyes is the right man to succeed Fergie?

Yeah, why not? Fergie had done exceptionally well at Aberdeen before being appointed at United, and Moyes has done…well I wouldn’t go as far as to say exceptionally well but he has done a really, really good job at Everton over the last however long it’s been. With Fergie in the wings I don’t expect much to change, but I’ve been surprised at the inactivity in the transfer market this season.

Where do you think your club will finish this season?

8th. That would make it seven seasons in a row we’ve improved on last season’s finishing position.

What is your prediction for the top four?

Tell us about your rivalry with Cardiff.

If anyone reading this hasn’t witnessed one before – watch it. I’ve never been to another derby, but I honestly believe it’s one of if not the most bitterly contested derby in the Football League & Premier League. The Old Firm is in a league of it’s own, but to give you an idea I went to the last derby at Ninian Park (Cardiff/Malaysia Red Dragons’ old ground) and it’s organised as a bubble trip. You arrive at your stadium hours and hours ahead to get onto the official coaches, and as your convoy goes up the motorway all junctions are closed as you pass, with full police escort and everything. We were robbed of a famous 2-1 win by some dodgy Mike Dean officiating, and afterwards had the pleasure of being pelted with rubble, glass and anything else a sizable mob of Cardiff “fans” could find lying around the adjacent construction site for Cardiff’s new home. I just pray that everyone behaves themselves this time – Premier League exposure has the potential to embarrass Wales as a whole and I really hope the headlines are football, not violence-related.