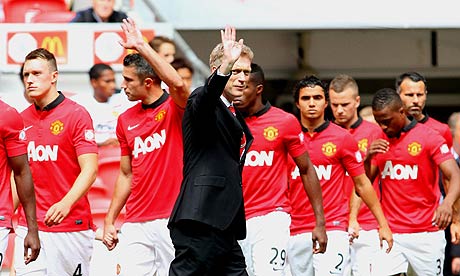 For 26 trophy laden years, there was more chance of hell freezing over than seeing a Manchester United manager appear on live TV for punditry work. The prospect of a riled Sir Alex Ferguson putting Crayola soaked bore Adrian Chiles and resentful prawn Roy Keane (whose ‘hard-hitting’ criticism and forthright ‘expertise’ never translated into managerial success) in their places would have been worth the TV License fee alone.

Alas, the Godfather has moved upstairs, and his lofty shoes have been filled by the young pretender David Moyes. Tactically placed between Keane and Lee Dixon, Moyes was always going to be the centre of attention in ITV’s position at Wembley. The reason being that the cliched, unrelenting hullabaloo surrounding Wayne Rooney’s future refused to die down.

Moyes’ venture into the relatively uncharted territory of Chiles’ verbal diarrhoea filled chat-show had all the hallmarks of his predecessor, who probably had a quiet word of warning in Moyes’ ear upon entering the studio of doom. What seemed glaringly obvious was the lack of Rooney transfer interrogation, which Chiles was probably itching to hurl Moyes’ way. Going back to the 1990 Godfather installment, the message about Rooney was, ‘it’s business, not personal’.

With the media robots and tabloid vultures circling and waiting on a Moyes slip of the tongue, he brought his A-game and stuck to his guns. His stance regarding Rooney has been crystal clear from the outset, and continuing to field questions on the seemingly non-starter of a Rooney transfer has become tedious and onerous from Moyes’ perspective.

Upon last night’s friendly against Scotland, Rooney’s emerged from under the rock he has been living under amid constant flack from our supporters to end his pseudo-media silence. Although not in the way we all had hoped, Rooney shifted the emphasis away from transfer speculation to express his gratitude to Roy Hodgson for trusting his fitness and giving him the opportunity to strut his stuff for the first time this season. Subtle dig at Moyes? Probably. The point was, Rooney was eager to let his football do the talking, a release from the fact/fiction circus.

Moyes’ first press conference was a familiar tale- Wayne Rooney this, Wayne Rooney that, we’d have an overflowing transfer kitty if £1 was donated for every Rooney question Moyes has had to endure. He said that Rooney ‘had a glint in his eye’, does he have a point to prove? Some will say yes after being outshone by Robin Van Persie, some will say 196 goals is no mean feat and he doesn’t need to prove a thing. But Rooney looked trim and in good condition, something Moyes and captain Nemanja Vidic alluded to in that first press conference. Obviously hindered by rustiness having not featured all pre-season, Rooney looked hungry and glad to be in action.

Under normal circumstances, with Rooney substituted after 65 minutes (his woe story last season), sharks such as Custis would have been sniffing blood- leaping on the most minuscule opportunity to stir some drivel. Had it not been for another Scouser taking the plaudits, debutant Rickie Lambert,  we may have been scoffing at those customary Rooney headlines over our Corn Flakes this morning.

Moyes was encouraged by Rooney’s contributions but was cautious about making too bold a statement when asked if he’d be fit for the defence of our title against Swansea on Saturday.

‘There are no more developments and we don’t want any because we’ve told everybody he’s not for sale.”

‘I’ll need to see how he is when I get back. I’ll try and assess him. I watched the game last night and I thought for the 65 minutes he played he did well, he ran around and got himself some fitness.’

This stance has been unequivocal publicly and behind the scenes, with United apparently taking a ‘top-level’ decision to shun any advances for Rooney regardless of any price.

Watching Rooney in the flesh for the first time as United manager, Moyes talked about his overall contribution and fitness and was largely positive.

Moyes’ positive assessment of the so-called ‘want-away’ striker should reassure Rooney that he is still valued at United. The whole situation has become tediously drawn-out and over-egged: it is not like Rooney will suddenly become a bench player at United, his quality is still there for all to see. His beef was with Sir Alex, their relationship tetchier by the day, NOT the club. But now it is a new era, surely water under the bridge now?

Robin Van Persie and Nemanja Vidic have questioned why Rooney would want to leave, the star striker and captain are at least speaking sense. They questioned if ‘deep down’ Rooney wanted to leave, both players and fans alike are asking the same question.

Moyes’ PR appearance was a success, it’s not hard to look good alongside Adrian Chiles, but Moyes’ public opinions on Rooney and outlining his plans, with Rooney in them, will hopefully go a long way to getting his ‘angry and confused’ head in the right place and getting Rooney back to the levels we know he is capable of.

Moyes playing his cards last night was a minor victory, which could be even more significant come 2nd September when the transfer window slams shut.