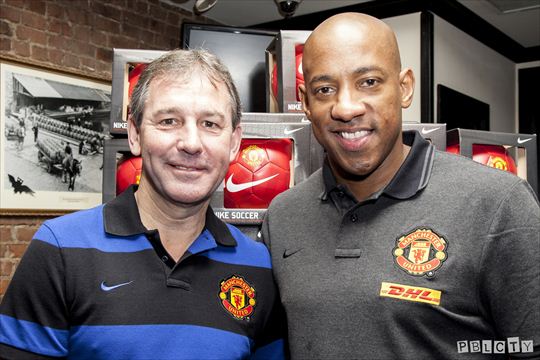 Fuck off – it was 4:40 am and the dreaded alarm had sounded. In the usual morning daze I reached into my closet, grabbed my fitted jeans, and my United jersey. Another hour ride to the local train station was in order as I prepared to enter the Big Apple, alone. And needless to say I was scared shitless. The occasion on the brisk mid-October morning was momentous – I was headed to New York for the I Am United fan gathering when the reds took on Stoke City and our previous famous number seven, Michael Owen. Well, that statement may be a bit outlandish seeing as Eric Cantona and Cristiano Ronaldo were a few to sport the iconic 7.

As I arrived at the venue nearly 2,000 reds piled to watch Manchester United amongst two United greats in Dion Dublin and Bryan Robson. For the 10am (EST) kick-off time, my thoughts were just as jumbled: Will United hold off a rough and tough Stoke City style? Peter Crouch and Charlie Adam were two of whom I worried slightly about, but we had Robin van Persie and Wayne Rooney to quell any threats. Despite my diminished worry about being alone in the city, I felt immediately at ease with 2,000 reds surrounding me.

In preparation to the match, Robson and Dublin gave a few interviews before addressing the entirety in attendance. To be expected, Robbo interviews well as a reds ambassador, and was a superb guest. As for Dublin, he gave his trademark “I gave you Cantona” speech. His light-hearted nature brought a smile to my face, again easing any underlying tension I had left.

The time finally came, I was about to meet Robbo. I made certain to wipe the sweat off my palm before shaking the legends hand, whom returned my boyish smiles with a firm greeting and “It’s a pleasure to meet you as well.” Unfortunately, I didn’t bring myself to ask for his autograph – maybe another time. A true gent Robbo is, even though I did not see him down a pint but, I’m sure he can still bang them down with the best of them.

Needless to say, seeing reds flock to New York on a brisk October morning was stunning. Dublin and Robbo addressing the bright-eyed crowd and the lady next to me, legs crossed and extremely attentive, politely asked “Who is that” in reference to the charismatic speaker. As much as I’d like to have told her to take a hike, I answered the only way I knew how “That, is Captain Marvel.” She smiled in that I-have-no-idea-what-he-just-said, and glanced back to the former red. Her reaction was typical, but I understood every red needed a starting point, and that for a young red like myself, I was ahead of the eight ball especially in America.

Luckily enough, I was able to attend the I Am United fan party (the first of it’s kind) and was one of nearly 12,000 applicants who applied for a ticket. On the day, Wayne Rooney bagged a hat-trick – two for United and one for Stoke. Robin van Persie tallied right before halftime, and Danny Welbeck tallied immediately at the start of the second half. With United up 4-1, Kightly bagged a consolation goal just before the hour mark. And yes, Owen made a cameo appearance – one which was booed by those true reds in attendance.

A true experience of a lifetime, United gave me a bit extra love and support that morning. Three points were on my mind; however, the atmosphere was electric and meeting former United members was a heart warming time. Upon the conclusion of the event, I remember what happened next vividly. Exiting the venue with the blue-sky and sun blaring down at my face, I walked back to the train station in solace…I Am United.