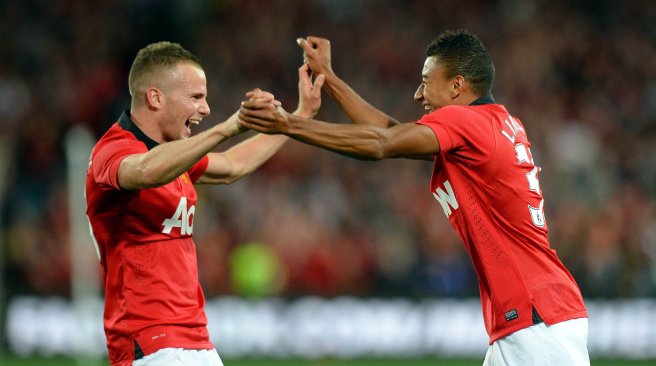 Who is Jesse Lingard? He’s a scoring machine. Well, that statement may have been a bit farfetched but his performances in Manchester United’s pre-season tour have been nothing short of phenomenal. What more could you ask for a 20-year-old who’s progressed through United’s youth academy and a part of the 2010-11 FA Youth Cup? After signing his first professional contract in 2010, this summer’s tour was his second.

Here’s one for those trivia fans in the years to come – Who was the first to score in the David Moyes era? Jesse Lingard to be exact. Although he could likely be sent out on loan again this season to a lower Premier League club, but if he continues to score at this rate it may be nearly impossible for Moyes to demote the youngster to the bench or even another loan spell. Certainly, the pre-season tour is used to harness additional fitness leading to the buildup of the Premier League; however, youngsters like Lingard, Adnan Januzaj and Wilfried Zaha continue to impress the entirety of football world with pace, magnificent touches, and willingness to drive forward.

In the attacking midfield role, he’s quite capable of playing wide but seems to favor the striking position. The first rate performances between he, Zaha and even Danny Welbeck is phenomenal – with precise off the ball movement bringing additional goals to their names. After his two goal performance against the A League All-Starts he told MUTV’s Steward Gardner: “It’s been great, getting on the scoresheet and scoring two. Playing in front of all these fans, the fans are great, and the team played very well.”

According to ESPN FC, Moyes was equally thrilled with Lingard’s performance and in particular how noted his performance in Australia: “Jesse played well tonight. I was actually hoping he would get a hat-trick because I think for a young boy to get that at Manchester Unite is a big thing.” The Scot then added: “You want to be with them regularly. You want to get used to how they train and how they prepare for games. The lads have been great, the banter’s flying about and they’ve welcome the young lads into the squad very well.”

If Jesse Lingard can continue his fine form, he may be making a real case to secure a spot in Moyes’ first team. Ambition is, at times, the biggest motivation in a footballers life – and with a relatively young career and what seems a promising one ahead of him, the ambition to play under Moyes and for Manchester United is at an all-time high for Lingard. Whether or not he can keep up with his brilliant form as of late remains to be seen, but after this summer is over true United supporters will certainly not forget the name, Lingard.

Tom Cleverley and Danny Welbeck pushed their way into the first team – so why can’t Lingard? Believe in the lad, as this one holds the drive to be a red.

One response to “Who exactly is Jesse Lingard?”