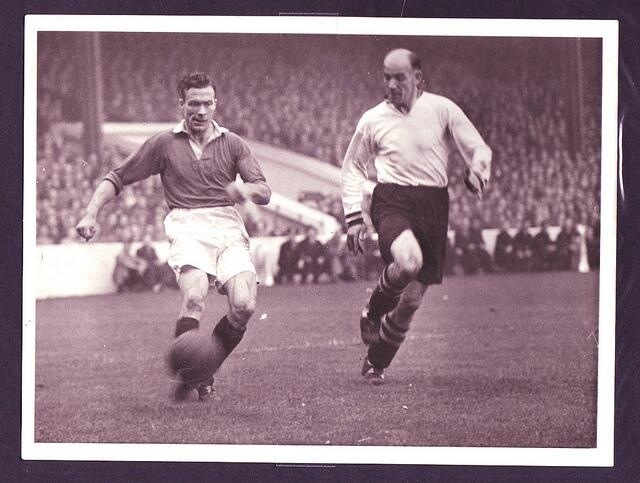 Professional contracts buy footballers mansions bigger than their egos, women as downright beauteous as Kate Upon, and vehicles faster than the speed of sound. However, football was not always that way – and unfortunately for Charlie Mitten, he played for Manchester United in the 1940’s. A time where football was more of a luxury rather than full-fledged profession, Mitten understood the value of a dollar and demanded more, which at the time proved to be his only, and biggest downfall with United. The Bogata Bandit as he was referred as ventured into the unknown, knowingly.

Charlie Mitten was far ahead of his time both on the pitch, and from a businessman standpoint. After initially signing with Manchester United in 1936, due to the second world war and his service to the Royal Air Force, his first appearance was not until 1946. As one of the keynote pieces in the early years of Matt Busby, the winger featured alongside Jack Rowley, Johnny Morris, Stan Pearson and Jimmy Delaney the five took Old Trafford by storm, known as the Famous Five. The success under Busby was not enough, and for the small amount of money footballers received during the 1940’s and 50’s, Mitten felt with the talents he was graced with, he should be earning more.

During his time with United, the maximum wage was only £12 per week and from a simple economic standpoint – that wasn’t enough for any footballer of his caliber. Understandably so, times were much different back 70 years ago; however, after joining United on their trip to America the money bug struck him. Approached to play for Independiente Santa Fe in Bogota for a signing fee of £5,000 plus a wage of £40, he took his talents elsewhere. And after just one season in Colombia before his return to England, he was treated as if he were a criminal.

The Ragoon-born Englishman was then viewed as an outlaw. Of course, Mitten was not an outlaw like today’s Luis Suarez; however, I’d view him more of a Cristiano Ronaldo – minus the pretty boy face, and switch to Real Madrid, of course. Upon his return to England and subsequently turning down a move to Madrid to play alongside Alfredo Di Stefano and Francisco Gento – he was banned by the FA who threw down a six month playing ban, and wage ban.

Although I wouldn’t say Charlie Mitten was solely out for his own best interests, he was a man with intent. Much like Sir Alex Ferguson was with his time at Manchester United, Mitten also had a unique vision for himself to better his career from all facets of football. But, Charlie Mitten was not a money hungry lad that the FA or former players may think of him as. Simply put, he was a sublime crowd pleaser who took the left-flank by storm with both pace and tenacity like none other during his relatively short career with the reds.

The outlaw, “Cheeky Charlie”, was a dressing room joker. Every footballer has their own niche within a club, and his was to play with a purpose. Even Patrice Evra gets a tough time often for his lack of defensive ability or his height, but the mood in the locker room indicates the Frenchman is the rowdiest of them all even playing DJ in United’s dressing room. Football is more than deft touches or uncontrollable speed – football is a business. In my mind, he was wrongly greeted as a criminal upon his return to England: as many footballers do nowadays, each searches for his own personal pot of gold but never, question his allegiance to Manchester United.

One response to “Remember, Charlie Mitten?”