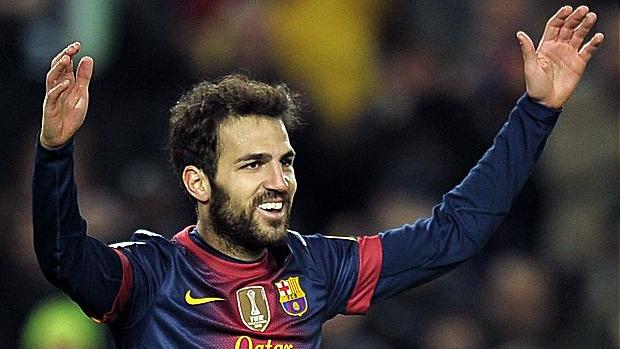 Cesc Fabregas has seemingly ended speculation about a possible move to Manchester United by insisting he has never thought about leaving Barcelona since rejoining in 2011.

David Moyes’ side had two bids for the former Arsenal captain rejected by Barcelona earlier this summer and it was believed they would submit a third in the coming days. Whether United’s stance stays the same remains to be seen, but one would think they’re pissing in the wind at this stage.

Fabregas kept silent after United made their interest in him official, prompting speculation that he was in favour of a transfer. That’s why Moyes’ response could be interesting at today’s press conference.

Speaking in a press conference today, the Spanish midfielder said:

“Triumphing in Barcelona is what I have been hoping for all my life, it’s been my dream since I was a child.

“I am very happy at Barcelona and I haven’t spoken to any other club in the last two years.”

When asked why he didn’t clear all of this up beforehand, he responded:

“I’ve been relaxed about it the whole time, I didn’t have to clarify anything because the only thing I was thinking about was staying at Barca. As I haven’t deceived anyone or hidden anything, I told the club’s press department that I would speak when it was my turn to speak to the press.”

In regard to wanting a Premier League return, Cesc Fabregas insists stories have been invented. He seems happy in Barcelona but that should mean he’s been promised more football. And when I say more football, I mean more starting places. Last season Fabregas started 19 games out of 45 appearances.

“Stories have been invented,” he said. “I don’t know why speculation grew even after Tito, Zubizarreta, Tata and Bartomeu all said they wanted me to stay.

“I was never given any sign from the club to make me think they didn’t want me, I have always felt wanted here. I spoke to Bartomeu, the president in person and Tata also told me he wanted me to stay and there’s been no problem.”