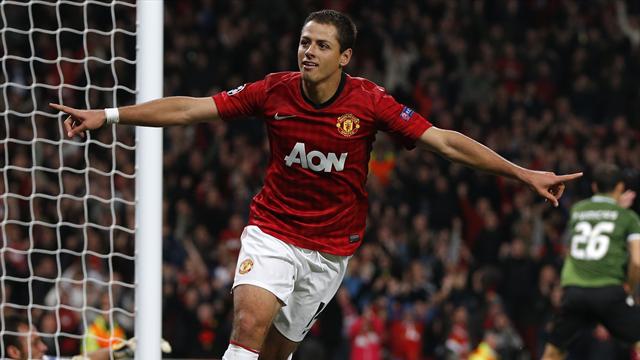 When Manchester United need a goal and quick, bring in Javier Hernandez. The privilege of having such a pure goal scorer with the reds is sometimes abused as more often than not, Chicharito has been left on the bench despite his impressive scoring touch. Whether he started a match under Sir Alex or appeared with 15 minutes to go, the Mexican international went after defenders and seemingly always found a kink in the armor of defenses – and he capitalised.

More often than not, strikers chances go begging as the critical moment to push the ball past the goalkeeper quickly comes and goes, but not for Chicharito. The 25-year-old is a bundle of energy whom should be a focal point in David Moyes’ side this upcoming campaign.

Robin van Persie came to Manchester United last season and lit up the Premier League and rightly deserves the nod for his plethora of goals. Chicharito does make a case for himself though, as his pace and Inzaghi-like poaching mentality can destroy any club throughout Europe. Through his killer instinct and immense work rate, the United front man deserves to feature more prominently within the attacking fold.

The usual smile that’s on his face indicates he’s a footballer that truly enjoys his profession. Even though he may not see the regular minutes he so desires, Hernandez fully comprehends the opportunity he’s been given with Manchester United, and he’s certainly played homage to his former manager for that both on and off the pitch.

How fitting was it that Chicharito tallied the final goal for Sir Alex at The Hawthorns in the thrilling 5-5 draw with West Brom. He could have very easily given into the negativity surrounding his lack of playing time, but instead focused on what he could do to get into those positions. And with 18 goals in all competitions last term for the 25-year-old, it wouldn’t be a surprise at all if he were to be featured with Robin van Persie on numerous occasions.

He’s admitted that being able to play under Ferguson has been a unique blessing in which he’ll cherish for the entirety of his life. Although he’s coined himself as one of Sir Alex’s boys’ his professionalism will shine through and his uncanny work rate will continue under the former Everton manager. As he noted on TV Azteca, Chicharito spoke about the opportunity he has been given to play for Manchester United in that the splendid ride has been: “More than an anecdote for me, I see it as an achievement and a blessing. It’s a source of pride to say I was with one of the best coaches in history.”

With a smile on his face, whether it be Van Persie or Danny Welbeck scoring, Chicharito relishes every moment he has as a footballer and it shows through his play. Making the most of his opportunities has allowed Chicharito rise from being little known, to arguably one of the best Mexican internationals ever.

As Chicharito’s contract is set to expire in the summer of 2016, Manchester United needs to start thinking soon about extending his deal. Per his request to see additional minutes on the pitch under Moyes, he’s backed up his statements with goals this summer for Mexico in World Cup Qualifying and the Confederations Cup. However, it still remains to be seen whether or not he can have a similar impact to that of Ruud van Nistelrooy during his time with the club but, with real intent going forward as he floats amongst the shoulders of the last defender he’s due for a few goals.