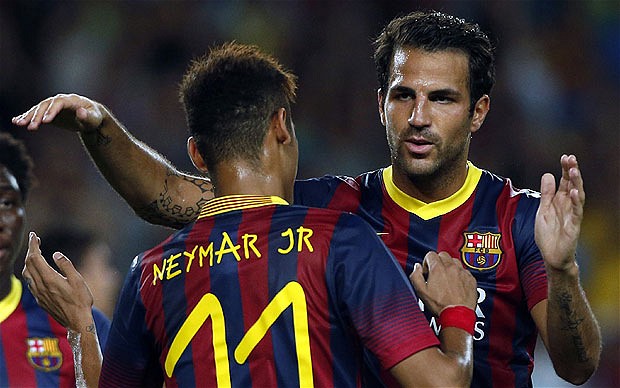 From the website Barcelona FC Blog, Steve talks to Stretty News about Cesc Fabregas and his prospective move to Manchester United.

According to the Spanish press, the Cesc Fabregás saga looks to have come to an end. Barcelona find themselves in Israel as part of their Peace Tour and director of football & ex Barca stopper Andoni Zubizarreta has come out and said that the player will not be sold. It looks like Manchester United have thrown the towel in, too but as with any transfer rumour, it could go the other way.

The fans still want the ex Arsenal FC midfielder to take the stand as it were, and publicly declare his love for the club and say that he wants to stay.

We don’t know what the deal with Fabregás is and any player worth their salt who has been reduced to playing second fiddle to Xavi and Iniesta would do well to stand back and analyze their situation.

Manchester United’s new boss David Moyes has offered Cesc a “get out of jail card” and we honestly don’t know whether he has bitten, or just playing for time. New Barca manager Tata Martino also said that he “couldn’t imagine his squad without Cesc” in an interview after beating Santos 8-0 in which the midfielder found the net twice, even hitting the post, which denied him a hat-trick.

26 year-old Cesc was in the stocks last year and fell out of favour with ex Barca coach Tito Vilanova, who reduced him to coming on as substitute for either Xavi or Iniesta. Even the fans were upset with his performances and let the player know on a few occasions with some heckling and whistling, something that didn’t go down well with the player.

This leaves us with the important question: Why would Fabregás stay at a club where he is almost doomed to be sitting on the bench this coming season?

Manchester United would be the ideal club for Cesc Fabregás to show off his talent once more. He’s one of the best midfielders in the world and needs playing time. United could offer the player that along with a chance to team up with ex Gunner Robin van Persie.

Barca thinks that money is no problem for Fabregás and we don’t think so, either. Fabregás is on similar wages to Xavi and Iniesta, around £6million a-year and United are rumoured to pay the star even more.

The start of the season will be crucial to Fabregás and his morale – especially the Spanish Supercup first leg against Atletico Madrid. Let’s see if Martino puts the midfielder in the starting eleven or uses him as a substitute. This will be the test of fire for Fabregás, to see if new manager Martino actually wants to use him. We believe that any failure on Tata Martino’s part to show confidence in Fabregás, would certainly push him closer to Old Trafford.

SN would like to thank Steve for his time. Read more of his work at Barcelona FC Blog.