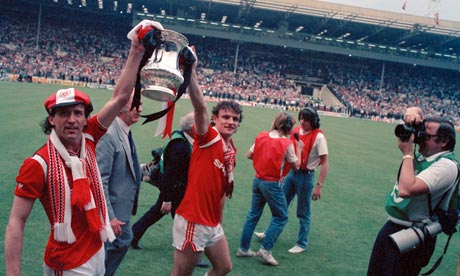 Last week I spoke with John Gidman, who played for Manchester United in the 80s as Ron Atkinson’s first signing. We discussed his youth career at Liverpool and moving on elsewhere after being cruelly rejected.

Your career started at Liverpool. What happened when you were released?

Well, I suppose it’s like every kids dream that you want to become a footballer. That’s what we wanted to do in those days and it’s still the same today. But I was just one of those kids that’s face was not liked by a certain person called Tony Waiters at Liverpool, the club I joined as an apprentice. Tony said that I did not have the ability to make a footballer professionally and to the standard that Liverpool wanted.

Obviously as a local lad, born bred in Liverpool, it must have hurt when you were let go?

I’ve got a letter here that was posted to my late mother and father signed by the famous Bill Shankly, who said I wasn’t adequate to do this or that. It’s the original one too which is amazing, but this happens a lot of children growing up. If your face doesn’t fit in certain spectrums of life, it won’t work. People do not like each other every day and what happens? You find yourself out of a job. In my case that happened, but I was fortunate enough for the door to open again at Aston Villa.

What’s important is that you never dropped the head and you moved on to be successful at Villa.

I’d agree that I was successful but I always say that I was told by the best and the greatest manager, except for Sir Matt Busby and Sir Alex Ferguson, that I was shite. To be told that at 15-years-old destroys your mind.

I must have been so thick that I didn’t realise what he was saying but I went on to play for Villa and they gave me a month long trial. Then followed a chance to sign a one-year professional contract. It changed my life. From being thrown out of Liverpool to becoming a professional footballer elsewhere, I was so fortunate and then I started  to believe in myself. At the end of the day, I feel sorry for these kids that are being taken to these camps where they sign immediately for clubs and then they’re turned away in years, if not months, down the line. Their hearts all of a sudden are broken.

There is lots of pressure involved. Silly comparisons come shortly after any youngster is attempting to break into a first team. You see it every time.

You’ve got to take a lot into consideration. There are parents who are pushing their kids into today’s football where footballers are making lots of money. They think their 5-year-old or whatever is good enough to sign and play for that club. Well, your system changes and people always refer to a certain lady. In your teenage years you lose your virginity, starting looking at women, booze, and that’s where you start going down the rail. You have got to be dedicated on that line upwards

Less than 10 years after joining Villa, you were back in Liverpool playing for Everton. How did that go?

It didn’t go great for me. I played the worst football of my career there due to inconsistency. The football Everton played didn’t suit my style being an attack-minded right back. Why the hell they bought me I’ll never know. On the phone I was told they were looking for an “attacking full-back” but when I went to Everton it was the opposite. It was very defensive, therefore, never fulfilled my needs as a footballer.

Yeah, but at the end of the day you need other players. It’s a team game. I needed other players to understand my capabilities. I’m not going to mention names but at Everton I didn’t think those people were up to standard.

In 1981 you joined Manchester United. How did it come about?

I went over on tour of Japan with Everton and I had to go to LA for an 8-day break. Howard Kendall came in one day and I knew there was something wrong. What followed was an early morning phone call. I was sat in reception and one lady answered and said “is Mr. Gidman available? I’ve got a Mr. Ron Atkinson on the phone from England.” He came on the phone and said “don’t be greedy, will you come to Man United as my first signing?” I couldn’t refuse.

You said before you went to Everton that you asked questions about the style of play etc. Did that ever cross your mind when United showed interest?

The biggest thing for me was that I knew Atkinson was a manager that had flare. I knew that from his West Brom days. When he mentioned Manchester United, my mind was made up.

You then joined a squad of great personalities. It was a squad that deserved more success.

Yes, I agree. I think it was unfortunate coming second some seasons but we had two cup finals and played in Europe. Ron just didn’t click that league challenge that he needed, but he was unfortunate. For me, he was still a great manager.

It was also a time when Liverpool were dominating in Europe.

I understand where you’re coming from saying Liverpool were dominating, but I don’t think I was ever on the losing side when played against them for Manchester United. In the 85 semi-final we didn’t get beat. I could see their faces every time. One of my best friends was John Wark and he always said to me after the games “I can’t believe it. We can’t beat you.” I don’t know if it was Ron Atkinson that had a curse on Liverpool but we always got a good result.

He wasn’t like Dave Sexton. He played good football. If I didn’t go forward, he would batter me and that’s what I needed. Atkinson was great at encouraging players.

Message to kids wishing to pursue a career in football?

I think back to the day Bill Shankly called me into his office and said I didn’t have the ability to be part of the club. That killed me. It killed me to the point where I let my father down. And then to go to Villa, who gave me one month to prove myself. What I say to kids is don’t give up to dickheads who say you’re not good enough. There’s something wrong with them and I put it down to school teachers and people who have never played the game. These people wanted to be something but they could never kick a fucking football. And I, John Gidman, am not allowed to teach children, youths and U-21s how to do things because I’ve got to take a coaching fuckin’ badge? A badge? Hang on. Football is a gift. George Best never done it. Diego Maradonna never done it. I’m not saying I was in their league, but tells you something that these kids that can be taught by someone who hasn’t got a clue.

I know a man in the FA, who couldn’t trap a bag of cement never mind play football, but he’s telling people how to play the game. Those with the gift should be in that position. Not the opposite.

I can see where you’re coming from, but look at Phil Neville. He hasn’t got all of his badges but still represented Manchester United as a player, therefore, got the coaching role under David Moyes.

Phil Neville and Gary Neville have done brilliant for the club. Another one to look at is Kevin Keegan. Becomes the England manager but he hasn’t got a coaching badge? He was at city but gets the England job. Oh so there’s bypasses. I’ve got friends like Steve Staunton who has had to take a £7,000 coaching badge to teach people when he’s played for Liverpool? He’s played and managed for the Republic of Ireland. I just don’t understand it but in my view this stems down to a person who was a school teacher years ago that introduced a coaching book. And that teacher never kicked a fucking ball in his life. What’s happened now is that footballers from all divisions struggle to get jobs because you’ve got dickheads teaching football and they haven’t got a fucking clue. It’s a disgrace.

I won’t mention his name, but there’s a person I played with at Villa and he thought Staunton his coaching badge. Steve has done a lot more than he will ever do, yet this guy can tell a former Liverpool and Republic of Ireland player not to kick the ball a certain way?

A question from @leeleemufc on Twitter: Is it true while at Kings Lynn FC you could be heard swearing for miles while taking training?

There are two things I can go on about in relation to that. Brian Little, who played for Aston Villa, rang asking if I wanted to remain working in football. I told him I wasn’t really bothered and he offered me the managerial job at Kings Lynn. I took it and in the end I got fucked over with my contract and they still owe me £19,000. I couldn’t put over what I wanted to put over in simple english, so what did I do? I swore.

Then I came to the conclusion that this wasn’t my scene, so I got out. They weren’t paying me but if I did swear, I didn’t mean any harm to anybody. It’s just football language I suppose. Look at fans in a stadium every weekend. I’ve seen a picture of you with a pint in your hand and I’m sure you’ve said “fuck off” to someone.

Good question. I’d have to look at Villa and say thank you for giving me the chance to become a professional footballer. Thank you for making me a player some people appreciated but one of the best things was putting on a Manchester United shirt. It was like putting on an England shirt when I made my debut at Wembley against Luxembourg. I just really, really enjoyed my time at United but I’ve still got my heart at Villa. It’s hard to split because I met so many great guys at United. Brian Robson, Gordon Strachan, Frank Stapleton, Gordon McQueen, Paul McGrath. I could keep going on.

One response to “Giddy for United: John Gidman reflects to SN about his career in the top flight”