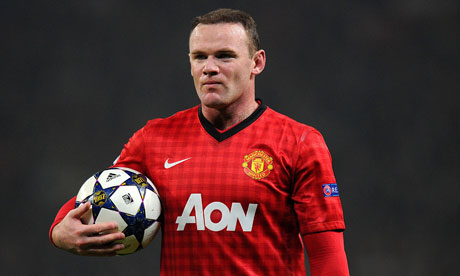 Wayne Rooney did not travel to Stockholm in Sweden for our pre-season friendly against AIK after ‘injuring his shoulder’.

He injured his shoulder in the behind-closed-doors game against Real Betis in Saturday and will not be traveling to Sweden.

It’s not like a player to pick up an injury and not travel with the squad when he’s kicking up a fuss and threatening to hand in a transfer request, is it? Gareth Bale is in a similar situation, making it all very convenient.

Yesterday I wrote about United rejecting a second bid from Chelsea for Rooney. It was today reported that the striker is angry with our stance and a transfer request is imminent. Let him. Rooney was “angry and upset” after Sir Alex Ferguson publicly stated he wanted a move elsewhere. What does this prove?

Rooney has two years remaining on his contract. United are in no rush to flog him off to Jose Mourinho, but that could be prove to be troublesome. It’s the last thing David Moyes needs hanging over his head when he should be focusing on his current squad and looking at ways to strengthen it. In an ideal world it would have been solved quicker but it’s complicated when Chelsea are the only club interested. United made it clear earlier this summer that they did not want to lose him to the Stamford Bridge side meaning it may become a matter of how much money they’re willing to spend.

If we were to get £40million for the 27-year-old it would make it easier to lure to likes of Cesc Fabregas away from Barcelona, and that’s what fans are beginning to want as they become even more frustrated with Rooney. That’s what United may be waiting for; to have a big name come in before losing a player of Wayne’s class to a title competing rival.

Ideally, Rooney would be sent abroad. But what can you do when a player wants to leave? You can’t tell him where to go. He’s open to a Chelsea switch and Mourinho is clearly trying to make it happen after losing out on Radamel Falcao and Edinson Cavani.

There is four weeks remaining in the summer transfer window and I, for one, want this saga wrapped up as soon as possible. We still haven’t signed a midfielder despite Moyes making it clear that’s what he intended on doing, and Rooney isn’t helping matters. Flog him off and get on with the real business.