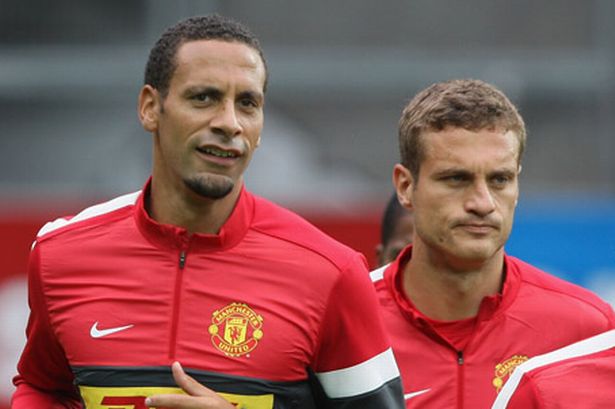 Questions have surrounded the midfield of Manchester United for what seems like an eternity (or since we had a fit Hargreaves). The forward line was criticised for allowing Man City to wrestle the title away from Old Trafford in 2012. Even the ‘keeper has been subjected to a twitterati barrage over the past two seasons.

But there’s always been a constant. An insurance that even if an obese Brazilian is chosen to protect them, our centre of defence is fine. In fact, it’s a lot better than that. Seeing the names ‘Ferdinand and Vidic’ in a starting line-up is as good a nerve settler as any. Those two have been the foundation for success at United for the last seven years. Both have had their injury worries but their class is undeniable. Vidic’s love of defending and getting stuck in complemented by Rio’s superb reading of the game and passing ability as a combination which has been largely unequalled anywhere in Europe.

Those two have earned their place in the Old Trafford Hall of Fame. An argument over the best central defensive pairing of all time is for another time, because now, despite the consistently of Rio and Vidic, a new pairing are emerging. Sir Alex called Phil Jones and Jonny Evans ‘the future’ when they were selected for the final match of the Ferguson era at West Brom. You could argue that the future is bleak looking with the five we shipped in that day, but you’d be wrong.

In Evans, there is a player who has sampled both the ups and downs of being a United player. Returning from a loan spell at Sunderland, he deputised for Rio during the 2008/09 season where we secured our 18th league title. He was assured, dependable, quick, everything you would want in a defender. The next two seasons though saw him struggle with injury and more worryingly, a complete crash in form. The West Ham cup game was as poor a performance as you’ll see and many thought that display alone would see him booted out the exit door.

His sending off against City was also the catalyst for one of the darkest days in United’s history. But injury to Vidic provided a lifeline. Knowing that from November till the end of the season, he would partner Rio in defence, Evans was outstanding. It was certainly not his fault we didn’t win the league that year. In fact, I’d go as far as to say that had he been marking Kompany at the Etihad on that Monday night in May, things might have ended a lot better for the red half of Manchester that season.

Last season was no different for the Ulsterman. His form was excellent and his goal return was equally as impressive. For the visit to the Bernabeau, he was chosen instead of Vidic in the heart of the back four. His omission from the home leg was unfortunate, Sir Alex opting for experience.

This year, that could be different.

Because Evans is now 25 years old. He has the experience of the Bernabeau last year to go with what he learned at the San Siro and Wembley in big matches. With United’s puzzling reluctance to use him as a full back option (under Fergie anyway) the lad needs to start cementing his place in the side. Because he is the natural defensive ally for Phil Jones.

The inability to find anyone good enough or even thin enough to fill our midfield void has so far stalled Jones’ progress at United. As good as he was in midfield in Madrid, it was eclipsed by the towering display he delivered against our bitter rivals City at centre half. He is a central defender and having now been at the club two years, United need to start using him in that position a lot more regularly than they are at the moment (just five occasions last season, one more than Carrick).

Alongside Evans there would be a balance of footballing ability and defensive tenacity. A threat at set pieces and a young core at the heart of a defence which you feel will only improve under Moyes.

I’m not dismissing the ability of Rio and Vidic. They could still provide crucial stability to a side which could well be entering the dreaded ‘transition phase’. What I’m saying is that in our loyalty to the pairing which has been incredible for United, we could hamper the development of those who will sooner rather than later, be expected to fill their shoes. The job of Moyes this season I feel is to ensure that Evans and Jones are able to participate in the present and not simply shelved for the future whenever Rio and Vidic ride off into the sunset.

One response to “Changing of the (defensive) guard?”