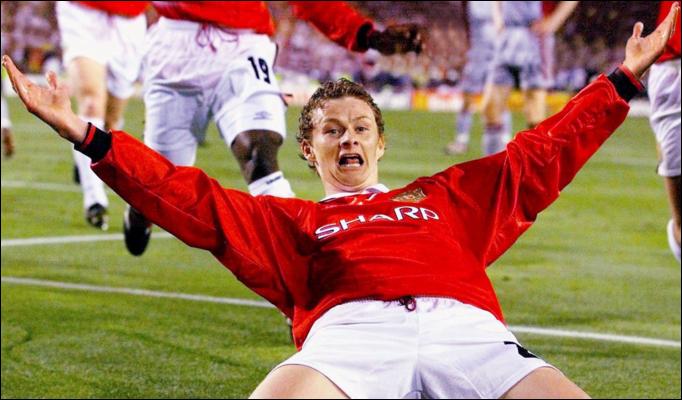 Let us relive a bit of Manchester United history. It’s 1998, and United are level 1-1 with Newcastle United and must earn a draw to keep up with leaders Arsenal. Yes, Arsenal – about six years ago that squad was what we like to call “invincible” but, that hasn’t been found in quite some time. Nevertheless, with Newcastle pressing for the winner, Ole Gunnar Solskjaer’s footballing brain clicked, and instantly he was tracking pack on defense. The forward who’d beaten out the likes of Eric Cantona, Dwight Yorke, and even Andy Cole at one time, proved in 1998 why he belonged in a Manchester United kit.

The Norwegian put the club ahead of himself, and committed a professional foul against Newcastle’s Robert Lee preventing him an opportunity on net – and immediately he knew the consequences. As that moment was one of many for the United great, the Stretford End would forever cheer the loyal frontman on with “You Are My Solskjaer” and “20 LEGEND” which was highlighted in red to also feature his name, Ole.

It’d be hard to forget the frontman who featured alongside Ruud van Nistelrooy during his heyday, and remained a red from 1996-2007. Resuming the number 20 kit while a red, Sir Alex Ferguson basically stole the Norwegian for a mere 1.5 million pounds, and the signing proved dividends especially during United’s treble winning season. At first glance, with Eric Cantona and Andy Cole already present in the squad whom both looked equally solid to hold onto their respective starting position, Solskjaer proved to be one of the best bargains in the history of the Premier League.

A mere six minutes into his debut appearance for Manchester United against Blackburn Rovers, saw the Norwegian find the back of the net – one of his 18 goals during his first season with United. We like to call Javier Hernandez our super-sub; however, Solskjaer would put Chicharito to shame with his plethora of goal scoring chances and his success rate. Sir Alex made it a habit to employ his third striker late in matches to leave his mark, and instead of leaving a small imprint onto matches – he left a crater in oppositions defenses.

Being a good footballer is more than scoring goals, or appearances. Instead, being a great footballer is one who is a student of the game, watches film after training sessions and without question, is all hands on deck. During matches, when pundits would glance over to the technical areas, Ole Gunnar Solskjaer was intently gazing onto the pitch as if nothing else mattered in the world – his eyes never left the pitch.

He even noted after his career was over that “I had to think about myself, how can I do the most damage for the opposition if I come on? I sat there and I studied football games but I didn’t exactly analyze their strikers […] Instead I would pay attention to what the defenders and full-backs were doing wrong.” Known as the “Baby-Faced Assassin” for his youthful looks and clinical finishing, Solskjaer made his money doing what others could not do for a full 90 minutes – concentrate at the task at hand.

Numerous impressive feats come to mind when we reflect on Ole’s career: his four goals in 12 minutes in United’s 8-1 routing of Nottingham Forest immediately comes to mind. A feat in which we all known Danny Welbeck couldn’t replicate if he had an empty net. Yet, looking back at his career with Manchester United I remember one particular moment which speaks dividends his character – he refused an offer from Tottenham even after United accepted the bid for him. That moment United would go onto relish in the 1999 Champions League final as he notched the game winner, thus securing the fabled treble and cementing Ferguson’s men into eternal glory.

With his playing career days over, we still readily recall “Who Put the Ball in the Germans’ Net?” or his boyish looks. After working closely with Ferguson with United’s strikers and also Reserve Squad, he made a move which was best for both he and his family – taking over as Molde FK’s manager in 2010 with a four-year contract attached to it. Despite the Aston Villa talks in 2012 after Alex McLeish was sacked, Ole didn’t want to disrupt his family life – and it’s hard to depart a club after winning the Tippeligaen in the first season with the club.

Carry on Solskjaer – we hope one day you’ll return.