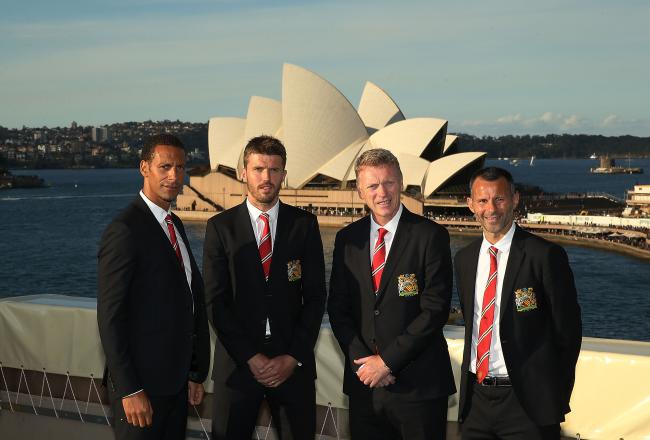 So, that’s the tour of South East Asia and Australia done and dusted. We’ve seen a mixed bag of results from the trip, and steadily improving performances from the boys after a decidedly rocky start threatened to get a little, shall we say, embarrassing. The ABUs out there must have been rubbing their hands with glee after Moyesy’s men contrived to lose two out of their first three games, against the might of a Singha x11 for example, and we nearly lost the fourth, too, but for a Moyes-Time equaliser from Zaha.

United’s latterday Phileas Foggs took in Bangkok, Sydney, Tokyo, Osaka and Hong Kong in a rather exhausting schedule. The wisdom of jetting off halfway around the world to play these games in stifling heat on pitches which were as bad as the cabbage patches United experienced in away cup clashes against lower league opposition in the 1970s, knackering players out with all that red-eye travelling just to line the coffers and allow our estimated 10 gazillion fans out there to have the opportunity to have a glimpse of their heroes like Buttner, Fabio and Smalling in the flesh is, ahem, open to some debate.

And although Moyes acknowledged that the whistlestop tour was not exactly “ideal preparation” for the crucially important new season, he towed the party-line somewhat by adding: “I think in football now if you’re one of the big clubs, you have to take your club to the supporters around the world. It means the extra money you earn from your marketing and from your sponsors is going to play a big part in the future. So I think it’s something we’re going to have to come to terms with and it is going to happen – and maybe even more so in the future.”

That last line has me a little perturbed. We don’t want to become footballing Harlem Globetrotters in the off season… But then again, we aren’t the only ones undertaking punishing intercontinental journeys. Indeed, to some Thais, or residents of Hong Kong, it must have seemed that they couldn’t move without bumping into a Premier League player this summer. Arsenal, Chelsea, city, Spurs, Sunderland: they’ve all been out there setting out their stalls, engaging in a bit of sports marketing.

So I’m uneasy. But to look on the bright side, there have been at least some positives to emerge from our international jetsetting. The stand-out performers have been the youngsters, with Lingard, Januzaj and Zaha particularly impressing. Tom Cleverley had an similarly outstanding pre-season a couple of years back and his form convinced Fergie not to send him back out on loan, although Wigan were interested in taking him back. The three players I’ve mentioned will all be hoping their displays have the same effect on new United supremo David Moyes.

From a fans’ perspective Zaha has perhaps looked the most impressive of this trio. But the 20-year-old has also made some of his more illustrious colleagues sit up and take notice of his ability too. This is Rio Ferdinand on the former Palace starlet: “The thing that has most impressed me about Wilf is his raw ability. He can take someone on from a standing start. He’s quick and direct but what has surprised me more than anything is how quickly he gets his shots off. I hadn’t seen a great deal of him beforehand and obviously he’s a winger but he seems to have a hunger to get inside and cause trouble in the opponents’ box and that’s a good thing to have. I don’t like to say too much too early but I think he’s a fantastic talent.”

It’s nice, then, to see at least one new face at United who we can get a little excited about. But that stellar signing which can really make us giddy to see that first game of the season still eludes us, and the business with Thiago Alcantara looked like a bit of a shambles, and the pursuit of Fabregas is starting to look desperate. Fans keep wondering why we’re still persisting, that there must have been some come ons from Barca or Cesc which we’ve not been party to. But it might be that we’ve simply got no other options. Fellaini might still come, but Moyes knows he’s not the answer on his own.

Moyes himself has already had something of a baptism of fire as United manager and after a frenzied month in which the press has pretty much jumped on everything he’s said, and then cooked up their own stories about it – the rift with Rooney – he’ll at least be under no illusions regarding the size of the task at hand for him. And he’ll have had a decent chance to get to know the players during the tour too. (Not that he didn’t know them before: Moyes signed four former United players whilst manager at Everton and has already brought Phil Neville with him).

Most of the time Moyes has handled himself well, and has come over as intelligent and authoritative. But at times he’s looked rather haunted, and sometimes very lonely. Although United’s start to the season is daunting to say the least, I think he’ll be much happier when the real business of the football season starts in August.

The Reds face Swedes AIK Fotboll next Tuesday at the Friends Arena in Solna, and then a Navas and Negredo-shorn Sevilla at Old Trafford on Friday 9th August for Rio Ferdinand’s testimonial, and then finally the countdown to the season proper can begin in earnest. (Talking of Countdown, did anyone else catch Ryan Giggs’ surprise special guest appearance on the Channel 4 show recently? Giggsy showed up to present Rachel Riley – the new Vorderman – with a bunch of flowers for reaching her 1,000th appearance on the show. Rachel said: “As a lifelong red, I’ve watched Giggsy rack up 1,000-plus appearances since I was five so there couldn’t have been a more special way to celebrate mine.” Good on her.)

Sky and BT have already dicked up the fixture list for us of course (nice of them). It’s getting to the stage when we might as well not bother looking at the fixture list until the TV companies have had their sticky fingers all over them. When they were first announced, they were littered with ‘TBCs’ but now we know we won’t be facing a Saturday 3pm kick off at Old Trafford until the last weekend in September. By that time, we’ll have been on the box a full six times, including Wigan in the Community Shield. By my reckoning, we have just three games with traditional kick off times before the end of the bloody year.

Won’t somebody think of the match-going Reds?

Still, despite the lack of activity on the transfer front, despite the two TV behemoths deciding to piss about with my calendar yet again, I can’t help but feel the butterflies in my belly when I think about the new season.

Even though it doesn’t feel like five minutes since we were simultaneously celebrating that famous twentieth title win, and wiping away the tears shed for Fergie’s retirement, United seem to have been away too long. Bring on Wigan in the Community Shield!

ANDREW KIRBY is the author of Fergie’s Finest: Sir Alex Ferguson’s First x11. He is currently writing a new book about Manchester United’s special relationship with the European Cup.

One response to “The Final Countdown: What goes on tour stays on tour”