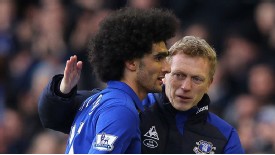 A few weeks back, Dale O’Donnell joined Nick Geber in a conversation on World Soccer Radio surrounding the appointment of David Moyes, the questions that arise with Wayne Rooney, and where Manchester United stand at the moment. This week, Dale and Nick spoke about Jose Mourinho’s mind games surrounding Wayne Rooney, various transfer news in particular Cesc Fabregas, and Dale’s expectations for the upcoming season.

As United’s tour throughout Asia and Australia concluded Monday after a thrilling 5-2 victory over Kitchee FC, the reds have since returned to Manchester to make final preparations ahead of the Premier League season. Coupled with tough training sessions in the next two weeks, Moyes’ boys also have a bit of business to handle on August 11th – the FA Community Shield at Wembley against Wigan Athletic. For Moyes, the first taste of silverware this early on in a season could prove dividends to retaining another Premier League crown.

Nick and Dale got straight to the nitty-gritty in their talk as the host asked if the amounts of pressure on United this season had escalated now that Sir Alex Ferguson has left. Without hesitation, Dale expressed his thoughts that there is loads of pressure on Moyes to succeed as manager of the reds, and as he comes into a squad full of promise and returning players from last seasons Premier League title, he must solidify the kinks in the armor.

Geber also noted the “tectonic shift in management, at a football institution like Manchester United” and it’s a shift of such magnitude that we may not see for another thirty years. Accurately pinpointed by the shift in management and philosophies of Sir Alex and Moyes brings us to the crossroads of the transfer season. As fans “we have our own opinions and who the ideal signing is” as Dale noted; however, as United have made it quite clear in recent weeks Cesc Fabregas is their number one target. And initially neither Dale nor Nick believed Fabregas to United would be a match made in heaven. Upon further reflection, Fabregas would be an ideal signing for United as Dale spoke about on World Soccer Radio, but the likeliness of him leaving Catalonia after only two years, is slim.

Adding onto the transfer season at United, Geber said it best that “Anyone is for sale, there is [always] a price.” What many neglect to note, is that negotiations between clubs and players – take time. Moyes and Manchester United must nurture their proposed signings, and it’s up to the supporters to get one simple rule through their heads as Dale noted “It takes time [the transfer process], people begin to panic.” With the Cesc saga going on a bit longer than we’d like, improved bids and talks between clubs will ultimately sort the fate of the deal – not our worrying Twitter posts.

In addition, if Fabregas is to remain with Barcelona, Geber asked O’Donnell about his thoughts on a possible move for Marouane Fellaini. Geber indicated very brilliantly that he pictures “Fellaini raising his hand [to United] like a school boy in class.” While Dale has his doubts if Fellaini could uphold such a high standard of play in European football at United, he did take a kind liking to the idea that if Cesc is to join us at Old Trafford – Fellaini’s inclusion as well, may be just what United have been missing since the Roy Keane days. Along with the Fellaini and Fabregas talks, when asked who would be most likely to be wearing the United kit next season, the Stretty News founder stated “I reckon Leighton Baines would be a good signing.” Another left-back? Well, let’s sign him up.

Of course, we couldn’t go the whole conversation without speaking towards the mind-games that Jose Mourinho’s been playing with David Moyes when it comes to Wayne Rooney. Dale noted “If Rooney wants out, try to get as much money out of Chelsea as they can. And get it done quickly.” Mourinho continues to try and play Moyes as a pawn in what has already proved to be a fantastic chess-match even before the season has begun.

2 responses to “World Soccer Radio speaks to SN about Mourinho, Fabregas and Fellaini”