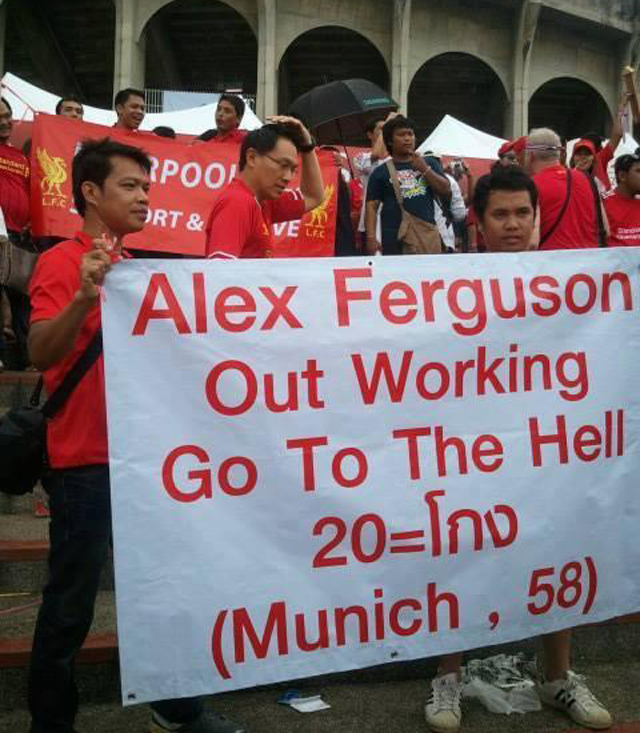 The North West derby is a magnificent rivalry. The roots are well documented from the industrial times. Manchester was famous for its manufacturing prowess while Liverpool was known for the importance of its port. That’s it, briefly, but then came the footballing aspect. I hate them as much as the next red and they feel the exact same about us, but the way we handle ourselves is more important than some think.

The meaning of rivalry, for those not fully sure, is a person or thing competing with another for the same objective or for superiority in the same field of activity. Sadly there will always be extremists who thrive on hate, trying to claim the moral high ground at every opportunity.

However frustrating I find Liverpool, I would never look at people who sing about Hillsborough as anything but tasteless cunts. Take note of our Calypso before I go any future: “Now, football is a pleasant game. Played in the sun, played in the rain. And the team that gets me excited, is Manchester United.”

Men and women of all ages never returned home after the Hillsborough disaster. Scousers or not, they went off that morning to enjoy 90 minutes of football. Not to be killed and laughed at by extremists for years to come. Now, there must be something wrong with you if you use the deaths of Liverpool fans of Manchester United players as a way of scoring points. Innocent people dying has nothing to do with a football rivalry.

When I go to watch United I soak up and contribute to the atmosphere. It has become a tradition to give Sam Platts a visit before kick-off, meeting fellow reds and downing a few beers. For me, cheering on the lads and watching them perform is what being a football fan is about. But in relation to Liverpool, the bastards, we don’t like them and vice versa. But in reality we have a lot in common and there’s a grudging respect.

Last week, during a pre-season friendly in Thailand, a few locals in Liverpool shirts were pictured outside the Rajamangala National Stadium holding aloft a banner that read: ‘Alex Ferguson Out Working Go To The Hell (Munich, 58).’ I’m not one that thinks it’s cool to score points by sharing pictures or YouTube videos to prove how Liverpool fans are scum for chanting tasteless lyrics etc. We know what happens and we don’t need two or three ignorant dickheads to inform us of that.

The vast majority of Liverpool fans will tell you this was wrong, so it’s unfair to hit them all with the same brush. Every fanbase has idiots and there’s no getting away from that. For instance, I know some Liverpool fans that I chat to regularly. They speak at length about music, fashion and, of course, football. All things that are of interest to an every day Liverpudlian.

In Manchester it’s similar. Go now and enjoy the football.