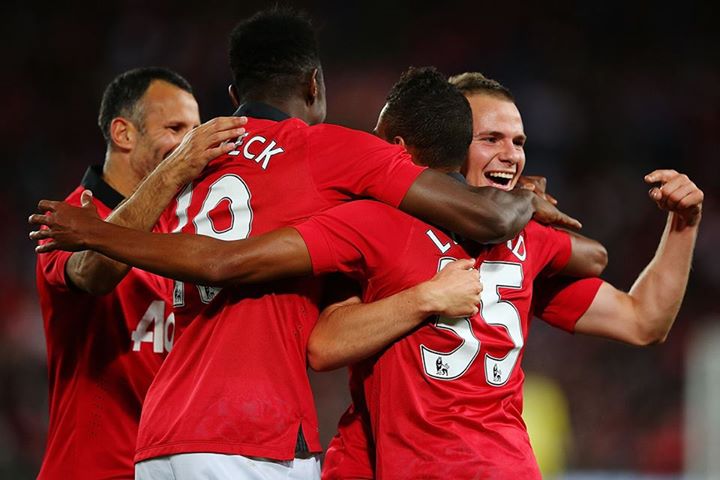 Manchester United saw the very benefits of a gruelling pre-season tour this time around. Opponents in peak condition and fitness, sweltering climates, clocking up the air miles and boggy surfaces like today’s have all provided David Moyes’ men with stiff challenges during the two week workout.

But one of the most striking positives from the tour has been the form of three men aspiring to make the cut and impress David Moyes. The manager upon stepping through the door was determined to continue the United tradition of bringing through local talent. Moyes has experience of doing such on his CV, credited for discovering Wayne Rooney and bringing through Jack Rodwell and Ross Barkley at Everton. So the performances of Jesse Lingard, Adnan Januzaj and Wilfried Zaha will have delighted the manager to no end on his quest to handpick his own fruit.

Lingard’s progression has thus far been encumbered a little, he flattered to deceive during a brief loan spell at Leicester City last season, but impressed upon his return, helping the reds win the elite Under 21 tournament. Although Lingard has plied his trade predominantly in centre-midfield, he has been hugely effective and shown signs of promise on the left side. He has been given license to roam from the flank, coming inside regularly as his goals on tour have demonstrated. He has shown a very surprising yet pleasing eye for goal, his two of his three strikes have found the top corner- showing he is capable of the spectacular. Of the trio concerned in this piece, Lingard is probably the outsider to gatecrash Moyes’ first-team plans and perhaps he could yet benefit from one more loan spell to further his education. He has put his hand up though and that is all he could do. He has turned a few heads that is for sure.

Januzaj has already turned heads. The back end of last season saw the young Belgian earn rave reviews from Sir Alex Ferguson, who tipped him for greatness wearing the United shirt. Januzaj’s hopes of getting first-team recognition have been significantly boosted over the past two weeks. Scooping the man of the match accolade in today’s victory over Kitchee was the icing on the cake, after notching his first ever goal for United. What makes Januzaj stand out from others is his balance, ice cool composure for an 18 year old and natural left foot. The left footed option could be a secret weapon, as the left midfield area has been a problematic area of late with Nani inconsistent, Ashley Young hampered by injury and the lack of that extra X factor, and Ryan Giggs not exactly getting any younger. Januzaj’s agent has come out publicly to state that his client will be offered an improved contract to avoid United becoming involved in another Paul Pogba mess. This linked with the youngster’s level-headed nature and hunger to succeed at United should lead to a very prosperous future for both player and club. Januzaj could go on to surprise a few people this season, judging on pre-season, he has a great chance to make it.

Wilfried Zaha has already gone down in United history, entering the archives as Sir Alex Ferguson’s last ever signing. During his fledgling start to his United career, Zaha has shown flair, directness and an eye for goal, all traits that go down well with the United faithful. These qualities have been missing down our flanks for a while now, it pains me to continue to mention how sub-par our wingers as a whole were last season. Zaha’s contribution in helping his previous club Crystal Palace join the promised land has rubbed off onto his first steps as a United player. His efforts from last season have him brimming with confidence and has taken his early chances to impress. For some, it may be a Herculean task to justify the £15M transfer fee at such a tender age, but if Zaha shows no respite in his attempts to wow the crowd and continues in his merry ways, Sir Alex Ferguson’s judgement will have been vindicated and will have discovered one of the best young talents in the country.

4 responses to “Trio impress on tour but are they ready?”