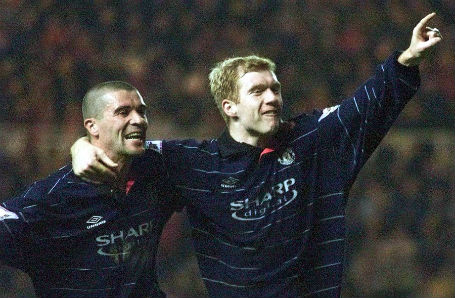 Quiet, submissive and timid. Paul Scholes’ temperament is the distinct inverse of the Paul Scholes that stepped across that white line. The classiest embodiment of that prominent footballing cliche ‘let your football do the talking’, Scholesy’s reluctance to flash his face in front of interviewers is barely detectable if you’d see the simple brashness he would bedazzle us with on a weekly basis. Shy and introvert off the pitch, expressive and clinical on the pitch. Paul Scholes was the ultimate professional.

Ingrained with modesty, Scholes would probably have loathed all the fuss his team-mates caused by affectionately referring to his eye of the needle passing as the ‘ginger sat-nav’, every pass virtually reached its destination. Scholes was the first of the modern day attacking midfielders who delivered in arriving late in the box and finding the net. This became his hallmark and Scholes’ feats were the benchmark for any aspiring midfielders.

Scholes premature opening retirement left a discernible hole in our midfield. So much so that Scholes admitted to Sir Alex Ferguson that he had made a decision, Ferguson said he had never been happier to be proven right. Scholes’ return was akin to the classic superhero returning to save the day. Scholes’ impact was untold, and reinvigorated our stalling title chase. He couldn’t get us over the line that year, but the magician was back.

If anyone is still unsure how much of a void Scholes has left after calling quits for good, our hell for leather pursuit of Cesc Fabregas will shine some light. The fact David Moyes spoke so glowingly and publicly about the dire need to find a replacement of Scholes’ ilk speaks volumes of how much Scholes brought to the table and how his walk into the sunset has already been as painful as one of his trademark ridiculously late tackles.

Scholes was never one to seek adulation or hogging the limelight, upon retiring for real he said ‘with the boss retiring and Wayne’s transfer request, I couldn’t have chosen a better time’. As dry witted as that remark is, in terms of our midfield it could not have been a worst time.  The absence of Michael Carrick through precautions this pre-season has zoomed in the microscope on the heir apparent replacements. Cleverley and Anderson have flattered to deceive thus far, making the heavily publicised and not too secret pursuit of Fabregas all that more vital.

As utopian thoughts go, a like-for-like replacement for Scholes is the dream. Sadly, it is a pipe-dream. As idyllic a prospect, there is a significant dearth in quality all-round midfielders who would possess the presence, aura and panache of a peak condition, pomp Scholes. Fabregas is unquestionably as close a specimen to the heyday ginger sat-nav, this is why obtaining his prized signature has been our most important prerogative.

In an era of ‘get rich quick’, divided loyalty and largely unwarranted razzmatazz, Scholes was the very antithesis to the stereotypical modern-day athlete. He was not immune to the ‘bad lad’ shenanigans- albeit not a party-goer, he enjoyed a tipple and a fag. What separates Scholes from the football  rat-race is his irrefutable loyalty. The ‘one club man’ is skittles and beer as far as romanticism is concerned.

Inter Milan president Massimo Moratti was hell bent on taking Scholes to Italy, “We tried really hard to sign Paul Scholes, we gave United a blank cheque, we talked to him, his reply for short and simple, “If you want me to play for you, you’d have to buy this club”. One of a kind, he didn’t have an agent, so it was hard enough.”

Loyalty these days is the poisonous apple of football. This is why Sir Bobby Charlton, Gary Neville, Scholes and Ryan Giggs, all one club men, go down in history as legends.

Speaking of loyalty, Scholes was speaking to Sky Sports after appearing in a ‘lad’s and dad’s’ match at Stalybridge last night, he gave a clear message to Wayne Rooney:

“Well my advice would be to stay obviously. “I don’t think there’s anywhere better than Manchester United to play your football, but it’s not the same for every person.

“If someone is not happy there then they want to go. If that’s Wayne’s feeling then that’s up to him, but he’s a top, top player and I think every United player and fan hopes he stays.”

Scholes was also quizzed about the chances of Fabregas stepping into his shoes at United:

“Well it would be nice to sign a player of that quality”.

“He’s proven in the Premier League, obviously he’s with Barcelona, it’s a big club, it will be difficult to get him away from there. But if you do, you have to fancy your chances strongly that we can go on and be successful with a player like that in your team.”

Cristiano Ronaldo once told the story about Scholes being able to hit trees from 60 yards away, one story emerging from last night’s game was Scholes spotting a few of his mates in the crowd at Stalybridge, he struck the ball towards them, resulting in beer going all over the place. They didn’t call him ‘sat-nav’ for nothing!

Scholes also alluded to the offer he had received to take up a coaching role with David Moyes. He revealed he had been in contact with Moyes and ‘would probably’ take up his offer after an extended break from football.

It will be terrific and bring back nostalgia to see his face around Carrington again. I cannot think of anyone better to pass on his expertise and knowledge to our academy hopefuls.

Paul Scholes really will be the irreplaceable sat-nav.