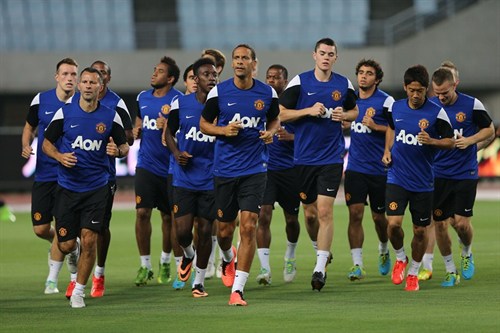 The David Moyes era is off to a bright start despite dropping two of their first three preseason matches. As all players involved on the tour along with those back at Carrington regaining their fitness as all members of the Manchester United organization gear up for what promises to be a thrilling Premier League campaign. Friday (July 26th) Moyes’ boys take on J-League club Cerezo Osaka at Nagai Stadium which has been home to Cerezo since 1996.  After dropping their last match to Yokohama F-Marinos in their previous match, United will look to come out of the gates in full force as jet-lag should not be an issue. Although, with scorching weather conditions in Japan, the conditioning of the reds will likely be tested especially those who only recently joined the club in Japan.

As those in attendance will await a dazzling display between Manchester United and Cerezo Osaka, there will be another present sent their way – United will debut their new away kit. On top of that bit to look forward to, Osaka will welcome home Shinji Kagawa who played for the club from 2006-2010 before he left for Dortmund. Those in attendance will be delighted to see him step foot on the pitch and will almost certainly be voted Man of the Match, even if give only 10 minutes by Moyes. In Japan, everyone loves Kagawa, just as Messi is adored at Barcelona.

With the competitive season just under three weeks away for United, before kicking off against Wigan Athletic for the FA Community Shield their fitness seems thoroughly impressive. Wilfried Zaha, Jesse Lingard and Danny Welbeck all stand out at the moment in the attack while Patrice Evra and Rafael also look splendid in their defensive duties. Even though Nemanja Vidic is not present in the preseason tour, fellow center-back, Rio Ferdinand remains solid in his performances per usual.

Expect United to play in a 4-4-2 against Osaka, with Rafael, Ferdinand, Smalling and Evra handling duties at the back. In the midfield, I’d expect for Anderson and Tom Cleverley to be given the center-midfield task allowing Michael Carrick to recover from his knock, while both Zaha and Ashley Young work the flanks. In attack, Kagawa will likely feature in the attacking midfield role just underneath either Robin van Persie or Danny Welbeck. Moyes did state to ManUtd.com that “Robin was a precaution the other night.  I expect he and (Danny) Welbeck to both play tomorrow.” As goals were a rarity last season for Welbeck, we can all hope he can discover a regular goal scoring form in preparation for the long Premier League and Champions League season ahead.

As the Cesc Fabregas deal still lies in the balance, and now rumors circulate more around Marouane Fellaini, David Moyes does not need a blockbuster signing. Although we’d all readily accept a class player like Fabregas and Fellaini to handle matters in our midfield, if United are to miss out on the Barcelona and Everton midfielders, it would not be the end of the world. Questions do arise in a weakened midfield for the reds; however, as Sir Alex did so well – a bit of trust in the youngin’s doesn’t hurt.