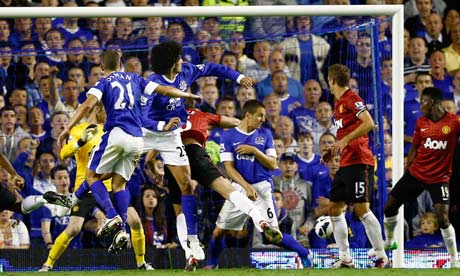 David Moyes stood on the Old Trafford touchline, laughing at Sir Alex Ferguson’s hallmark pointing at the watch, knowing full well that he had derailed United’s dwindling title hopes. His tactical master-plan revolved around a gangling afroman who was simply unplayable.

The opening day of any season is where fans are at their most optimistic, a new dawn brings fresh hope, but the opening gambit of last season saw us fall foul of the cunning Moyes and destructive Belgian. At a time when people were speculating whether the United empire was crumbling and City hegemony was threatening, Fellaini’s headed winner at Goodison felt like groundhog day.

On more than one occasion in the past, we have been tormented and susceptible to physically imposing monsters in midfield (Yaya Toure has also dominated against us, making established pros feel akin to us mere mortals). As recently as last year we assigned Phil Jones to the unenviable gladiatorial personal battle against Cristiano Ronaldo, but domestically the fact that he performed a similarly conservative role against Fellaini just goes to show the fear factor that he spreads into opposing defenders. Normally, a man marking role is designed to shackle the rare breed of footballer, the ilk of Ronaldo and Messi come up against these tactics every day. Of course, Fellaini is not in their league, no-one is, but it is credit to the lanky Belgian that teams go to such measures.

Our midfield has lacked a presence with grit and bite since Roy Keane’s infamous ‘prawn sandwich’ dig at our supporters. Fellaini is not a natural leader a la Keane and preceeding him Bryan Robson, but he may just fit the bill.

As he was adapting to the harsher rigours of English football, Fellaini was seen as a bit thuggish, a yellow-card junkie. In his opening two seasons with Everton, the card count reached double figures- a feat he surely does not cherish. Overall he has picked up 35 bookings in 138 games. This is a booking virtually every 4 games, as a guideline United normally rack up 60 games a season, I am no mathematician but even I know that would equate 15 bookings per season. This goes to show that Fellaini enjoys getting stuck in, he would provide something different in that respect. As I have already alluded to, at times we have been bullied in the big games, physically overcome. With the addition of Fellaini, we would be able to meet fire with fire.

Were Fellaini to be reunited with his mentor David Moyes, it would not simply be a case of beauty and the beast standing alongside Michael Carrick – Fellaini also has an unsuspecting grace mixed in with his physical attributes. As we suffered a bloody nose from Everton, Fellaini proved to be an outstanding target man with unreal touch and ball control. He has further enhanced his reputation by ending last season with his best goal tally since leaving Belgian football- he managed 11 Premier League goals. He is aerially imposing in both boxes, getting on the end of set-pieces, and proving more than a handful. Fellaini often benefited from the expert delivery from wide by Leighton Baines- with quality delivery, Fellaini is an undoubted goal threat either with head or feet. I wonder if by September 2nd that partnership will be wearing red and wreaking havoc?

Moyes exploited Fellaini’s attacking prowess by deploying him further forward, but Fellaini admitted that playing further forward is something he does not see as a long-term solution.

“I’m happy with my season, although I didn’t play in my best position.

“I’m not a No10. David Moyes predicts my future as a defensive midfielder, but due to a lack of offensive power, he plays me up front.

“In the future I want to play as a 6 or an 8. From there I can create danger and score goals”.

If Fellaini were to join, this admittance could play into our hands on numerous levels: he would fill a gaping void in midfield, which would give encouragement to Wayne Rooney if he was to see sense and stop being ‘angry and confused’. Playing Fellaini deeper means he would be no danger to Rooney’s position, we already have a plethora of attacking options, Fellaini would strengthen the defensive shield.

I understand why fans may be against Fellaini. He comes with a tarnished image- probably due to the amount of bookings, that ugly altercation with ex-Red Ryan Shawcross, some people would rightly be disgraced if he repeated that discretion in a United shirt. People think he is the beneficiary of the long-ball and would United have to adapt their fluid style to accommodate such a brute? But this will all be irrelevant if he knuckled down and sat alongside Michael Carrick, the position which he sees as his niche position.

I agree with those who may be opposed to Fellaini if he were to be our token midfield addition, I am of the same persuasion. With Moyes setting his sights on urgently addressing the centre midfield and already highlighted the need to replace Paul Scholes with a player of similar stature and poise, Fellaini is definitely not of Scholes’ ilk stylistically, giving weight to our Cesc Fabregas pursuit.

But if Fabregas and Fellaini were brought onboard, our midfield would be pretty formidable, not to mention Tom Cleverley and Shinji Kagawa are still learning their trade and yet to fully realise their full potential. What an awesome prospect.

At around £20M, Fellaini comes with a reasonable price, and he also has the potential to become an even better player. Of all our midfield targets, he is a virtual gimme. Everton have said on numerous occasions that they would not stand in a player’s way were a bigger club to register an official interest. The chance to work with Moyes again is something the big Belgian would probably relish. There can also be little doubting that Fellaini will offer something different, something we have been lacking for years- a dominating presence.

I know there are a lot of Fellaini doubters, skeptical about his qualities and ability, maybe this piece has turned your heads.

Let’s hope we get our two main targets, Fabregas first, then Fellaini.

He may well be money well spent.

11 responses to “Does the midfield need Fellaini?”