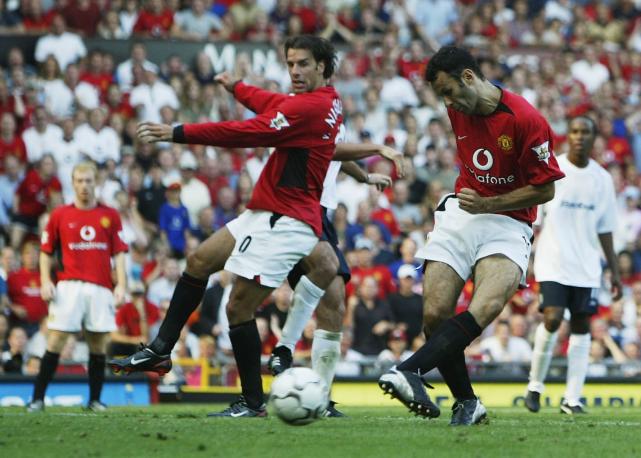 The title had been wrestled away from Old Trafford after Sylvain Wiltord slid home Arsenal’s only goal in a victory which sealed the championship in May 2002.

After a three year domination of the league following the heroics of the treble season, United fell well short in their bid to make it four in a row. The signings of Juan Sebastien Veron and Ruud van Nistelrooy should have seen United sweep aside all before them but instead it was Arsene Wenger’s men who were celebrating on the Old Trafford turf as they toasted the title.

The following summer, United made Rio Ferdinand a record signing as they set about recapturing their league crown. Red Issue’s front cover at the start of the 02/03 season illustrated what many reds were feeling. The picture of a basket containing a single egg with ‘Rio Ferdinand’ written on it was the image telling the story of a thousand angry words as supporters turned up to watch Ole Gunnar Solsjkaer strike a winner as we struggled against 10-man West Brom.

At Chelsea away on a Friday evening, United looked a lot better in a terrific encounter which ended 2-2. United would have won had Cudicini been penalised for taking down Paul Scholes as he rounded the ‘keeper. The Stamford Bridge game would be the last time the reds would score two goals in a league game until the end of September in a period which saw defeats at home to Bolton and away to Leeds. It would get worse, too.

In the last derby to be played at Main Road, United were humbled in a game remembered more for the way Gary Neville blanked former team mate Peter Schmeichel in the tunnel before his dallying allowed Shaun Goater to score for City than the action on the pitch. That moment only told part of the story. Without Roy Keane and David Beckham through injury, United delivered their worst performance in years against a City side that was only good enough to finish mid-table. It was a watershed moment. As Neville was hooked despite wearing the captain’s armband and John O’Shea missed from a foot out, the embarrassment was enormous.

Three years later,  Keane savaged players in a MUTV studio which would ultimately see him depart the club. If he had filmed ‘play the pundit’ after the City debacle, his exit would have been a lot sooner. If you thought 4-0 against Middlesborough was bad in ’05, the derby defeat and the gutless manner of the loss was much worse.

But just as supporters feared the worst, Sir Alex Ferguson inspired a turnaround which would catapult United towards a title charge. O’Shea emerged as a full-back capable of nutmegging wingers, Laurent Blanc was effectively retired as Wesley Brown became Rio’s central defence partner and Quinton Fortune was moved into the centre of midfield for the visit of Newcastle and visit to Anfield.

Suddenly, within three weeks, all had changed. Newcastle had been blown away before Liverpool were beaten in a game that gave Diego Forlan a place in United folklore. Arsenal, who had been in scintillating form, were beaten by a team with Phil Neville at its heart tackling everything in sight. Winning 2-0, United had clawed their way out of what was an almighty hole and with Keane, Beckham and Nicky Butt on their way back from injury, an optimism once more gripped reds.

The second half of the season was all about Ruud Van Nistelrooy and Paul Scholes. The duo were the difference in dragging United towards an eighth Premier League crown. It was a championship which was achieved through a determination to not go quietly or be second best. For the likes of Keane, Butt and Phil Neville; it was a final act of defiance. The team was changing and the group that had won three titles in a row from 99-01 were fading, but not before one last moment of glory.

A year on from when he was supposed to retire, Sir Alex Ferguson held the league trophy aloft once again. It had been a terrific campaign littered with exceptional goals and last gasp winners. It is a league title that is often forgotten about because of the three seasons that followed where United’s league form suffered as Ferguson built a new team. The reason I’m looking back at that season is because of the one we have just witnessed where we won our 13th Premier League title. The circumstances in which we won the league that year are worth noting when you look at our most recent success.

Because, 10 years ago, a Dutch striker fired Manchester United to the Premier League title. Rio Ferdinand excelled in central defence. An English midfielder at United was named in the PFA team of the year. United went out of the Champions League to Real Madrid. Ryan Giggs put his poor first half of the season behind him to produce some scintillating displays in the run-in and the day United lifted the trophy, they won 2-1.
Also, an English player and United’s ‘best player’ was left out of key games in the run-in. Despite starring for his country and even captaining United in the early part of that season; this player was omitted from the starting eleven of the home game against Real Madrid after having started in the Bernabeau. This player divided supporters. Some loved him, some criticised his lifestyle. This player was in his late 20’s, in his prime, arguably. He cut a solemn figure in the final home game of the season. This player had fallen out with Ferguson on more than one occasion. He was sold in the summer, only to be replaced by Cristiano Ronaldo.