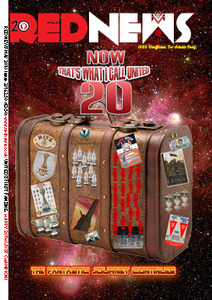 Our memories can be funny things, and the mind can play its tricks and games so there is the passing paradox when reaching a certain age that whilst you struggle to remember scorers and match detail from the recent past, such information springs to mind easier from years ago.

But we all remember our first time.

It might not be that specific; the exact when and how can also get lost in translation as time treads its fast path, though there are those lucky ones who recall every moment as if it were close enough to touch, but that magical moment will leave some sort of embrace as it touched us all; minor details of what you ate, more significant who you went with, what you wore, what you did will spring to mind as much as who scored and who we played.

How we got there is not as important as that you started there. Because that has led you here.

I’m lucky in that I can remember one thing so starkly it is like some vision, and whilst I’ll try and veer away from religious comparisons for fear of crassness, there is a hold that United can and does gives us and it can come in many forms; you just know when you’ve been touched by it.

My first attendance at Old Trafford may spark memories from others in that it was a foretelling of all that angst that was to come as we threw away a two goal lead against Spurs on 4th September 1976 to somehow clutch defeat from the jaws of rarer victories back then, but it is those young steps as I held my mother’s hands to arrive in the seats – lucky I know – that bring me emotionally gushing as whilst the large 60,723 crowd was significant in itself, as I doubt I had seen anything quite like it even on tv as this naive 5 year old, or been able to comprehend such, it was my staring eyes stage left that memory comes back even now, vivid, more clear than struggling to recall certain events from even last season.

There it, she, he, they were. Was. It swayed, it moved, it sung. It seemed technicolour bright, it stood out, as they stood, it seemed mad, it seemed, well, I struggle to pinpoint what was going through my 5 year old head bar some form of magic – possibly approaching lunacy – but if we can allow ourselves to fall for the Hollywood line that there is such a thing as love at first sight (as my wife will testify!), then at that very point it had me. The Stretford End. United.

The bedlam saw me fixated with it as much as the game. And I don’t use historical hindsight to make me go all luvvie on you; it even at a safe distance had held me, and I wanted it, and wanted more of it. You don’t forget such things, even if some of the smaller detail gets forgotten. We’ve all been there across time. The Stretford End, and sadly standing, may be no more, but even younger Reds, the ones that care, really care, near or far, pick up that same baton with their own significant act of theatre that sees them hooked; it might not be the first game, or a game itself, but the craic, the buzz, the United-ness and uniqueness which can so shake, and make, our lives.

I was fortunate that I came from a family of Reds and badgering my Mum incessantly saw me taken more often, then all of the time, home and away, and then abroad. From that point on, those wild innocent eyes capturing at least some aspect of the madness of the Red Army if not United itself, on and off the pitch, saw me hooked. An addict. For the better, and worse (wallet), and we went for the great times even if the football wasn’t, on a remarkable journey that we all hop on at some point; one that is shaped by moments, memories, but not trophies; they just a fortunate aside to recent times. It has us captivated.

I have had higher reference points since then – Barca ’84 and clarity from certain moments that night which, like ’99 in their town, can still give me goosebumps that those who don’t get all of this madness would be perplexed at. But in the 1500 or so games I’ve been fortunate to have been at since, none have that striking child like awe of clarity and inspiration as way back then; the moment I fell in love with United. Coming from a family of Reds, I had no choice of course, I was a fan at that point anyhows, and then you cross the line and become a supporter. You don’t realise of course that the line has been crossed, but it is. But however we got here that’s the point, isn’t it, none of us have a choice – even the most rational amongst us in the real world – it just gets us somewhere along the line and suddenly the hand or grasp of United has you, pulling you this way and that.

We all remember our first time even if it isn’t that clear. Even if the detail gets forgotten it captivates and captures us. It is what Sir Matt so aptly described as: “I feel a sense of romance, wonder and mystery, a sense of beauty and a sense of poetry. On such occasions the game has the timeless, magical qualities of legend.”

It is unlike anything else. We share not just first games and first significant memories, but the first time you knew it was more than just a hobby. We share this. United.