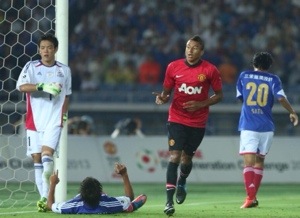 Today’s result was far from ideal but these pre-season fixtures are about fitness. Yokohama F.Marinos are midway through their season so were ahead of us as far as fitness is concerned, but that only made the run out more worthwhile.

Despite only playing 29 minutes, Shinji Kagawa was named man of the match. An absolute joke which was rightly jeered once announced. Although it was predictable given how the cameraman focused more on the Japanese star when on the bench than he did on the game itself.

Check SN after each game this season for football goals scored at Old Trafford and other stadiums around Europe.

David Moyes has aimed to fit in 90 minutes for everybody within the traveling squad. The starting eleven contained a lot of youth with Adnan Januzaj, Jesse Lingard and Wilfried Zaha all involved. They impressed but for the new manager it’s about taking opportunities in these games because they don’t come around too often when the Premier League kicks off again.

Inside the first minute Yokohama F.Marinos opened the scoring. A misplaced pass from Patrice Evra put the back four under pressure. Following a superb save from David de Gea, a chance opened up and United were behind. It was a clear indication to the red that these guys weren’t there to allow the Premier League champions walk all over them.

Shunsuke Nakamura, 35, was a familiar face in the Yokohama team. The Japanese midfielder spent four years at Celtic, won 3 SPL titles and scored against Manchester United in the Champions League. He lead his local team out as captain but was substituted early in the game.

Nineteen minutes into the game, Jesse Lingard scored an equalizer for United. The young Manchester lad scored twice last week against the A-League All Stars, so has put his name on the world football map as a potential talent.

Massakazu Tashiro scored an own goal which put United ahead. A lack of communication between the defender and goalkeeper was to blame for the error, but Yokohama F.Marinos still managed to come back and beat the reds 3-2.