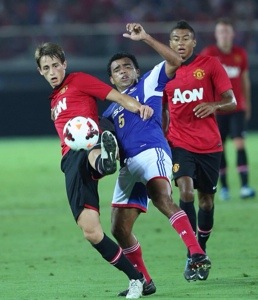 Manchester United’s third match of the 2013 Tour ended in a 3-2 defeat against Yokohama F. Marinos in a packed Nissan Stadium in Yokohama.

David Moyes handed Robin van Persie and David de Gea their first starts of the tour, with the Dutchman in a lone forward role, supported by the youthful trio of Adnan Januzaj, Jesse Lingard and Wilfried Zaha. Tom Cleverley and Anderson occupied the two holding midfield positions, in front of a back four of Fabio, Jonny Evans, Phil Jones and Patrice Evra.

That defensive line was caught out immediately as a mistake from Patrice Evra conceded possession, and although David de Gea produced a fine save to keep out the initial effort, he was helpless in preventing Marquinhos’ volley from 10 yards out from finding the bottom corner after just 27 seconds.

Despite seeing almost as much of Shinji Kagawa on the United bench as the match itself, it was clear that the home side drew confidence from the early goal and maintained possession well. The first chance for United fell to Adnan Januzaj on 9 minutes, but his crisply struck volley sailed narrowly over the crossbar. However, 10 min later, another United youngster grabbed the equaliser as Jesse Lingard played Zaha down the right, and after beating his man, the winger’s van Persie-bound cross was blocked, but fell kindly for Lingard, who finished from close range.

United slowly grew into the game and on 30 minutes, took the lead. Januzaj’s free kick from the left cleared the flailing goalkeeper and hit the off-guard Masakazu Tashiro, and despite the defender getting back to clear, the ball had definitely crept over the line.

Changes were made at half time as Ashley Young and Danny Welbeck replaced Jesse Lingard and Robin van Persie but once again, United lost concentration after the break and left F.Marinos centre back Fabio unattended at the back post from a corner to head past the stranded De Gea. The goal, combined with the appearance of Kagawa on the sidelines to warm up, raised the volume of the crowd which reached its peak when Kagawa replaced Januzaj after an hour. The Japanese international had a great chance to net United’s third seven minutes after coming on as he was found by Young’s incisive through ball but his left footed curler was placed straight at the goalkeeper.

Both teams pursued a winner late on but it was the Yokohama F-Marinos who scored in the 87 minute through Yoshihito Fujita, who slotted past De Gea after the United defence was left exposed. Even five minutes of ‘Shinji-time’ was not enough for United to salvage a draw as the first match of the Reds’ Asian leg of the 2013 Tour ended in defeat.