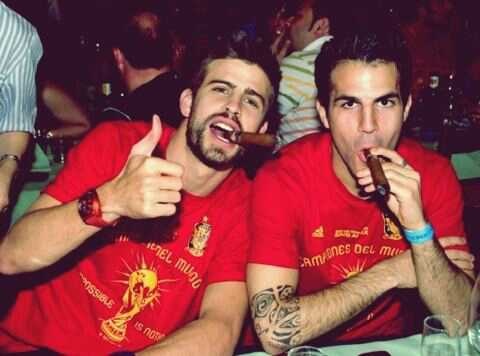 Former Manchester United defender Gerard Pique has advised the club to give up on trying to lure Cesc Fabregas away from the Nou Camp, warning David Moyes that the Premier League champions’ attempts to sign the midfielder are a waste of time.

The reds have already had two bids rejected for Fabregas with the latest believed to be worth £30million plus add-ons. It is now said that the club are pondering over breaking their transfer record fee and offering £35million, although that remains to be seen.

Pique believes there is no chance Fabregas will move to Old Trafford just two after getting his dream move back to Catalonia. The 26-year-old left Arsenal as captain after a giant ordeal between both clubs.

Speaking to Sky Sports about his Spanish counterpart, he said:

“United are wasting their time. It took a long time for Cesc to get his dream move back home and he won’t give it up.

“This is home. It is where his family is, and he is playing with his closest friends. He has told us he is happy and that he intends to stay with Barcelona.”

Pique left United in 2008 to return to Barcelona. Ever since, he has gone on to make more than 200 appearances for the Spanish giants, but only managed to play 23 times for United.