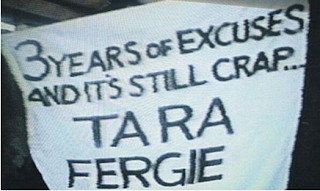 United fanatic Pete Molyneux raised a banner calling for Alex Ferguson’s head. For manager and supporter alike it was their darkest hour. Pete never gave up on his team and, thank God, Fergie stayed.

Ta Ra Fergie tells Pete’s story of his time following United at home and abroad since 1964, attending over 2,000 matches. This is the story of United from a fan s perspective covering Alex Ferguson s reign. From the despair of relegation and the tortuous false-dawns of the 1980s to that elusive title win, the doubles, the treble and two more European Cups, his obsession with watching United brought countless thrills but it also had a darker side that led to heartache and tragedy.

Speaking exclusively to SN, Pete describes himself as “the prat” who held up the banner in 1989. Buy Ta Ra Fergie via Amazon.