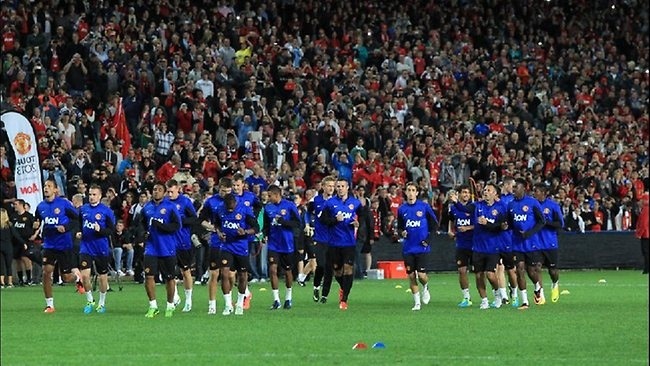 Rise and shine. No matter where you are around the world today (July 20th) it’s sure to be another spectacle in Sydney, Australia as the reds take on the A League All-Stars at the ANZ Stadium. To know more about the A League and their selections which will not include Emile Heskey and Alessandro Del Piero, Neil Sherwin from Back Page Football provided an exceptional background of the players within their squad. A packed stadium of nearly 83,000 will be in attendance despite Wayne Rooney not being present – Yes, Wayne we continue on without you.

David Moyes will look to his available squad to bring additional firepower in their second pre-season match of their 2013 tour. Although it is important to note that the available players along for the tour enjoy all aspects of the trip in Thailand, and Australia thus far – match days are purely business. After a disappointing start to Moyes’ career with Manchester United losing to the Singha All-Stars, after all it is still pre-season.

Once again, the Scot has very little to choose from as Nani, Rooney, and Ashley Young are back in Manchester recovering or in Rooney’s case probably searching the local markets for a second job to keep him occupied this upcoming Premier League season. The good news is that David de Gea and Robin van Persie have joined United in Australia; however, their impact on the match will likely be limited as Anders Lindegaard or Amos could feature in net although it would not be surprising to see Moyes give the Spaniard a half of match action. As for Robin van Persie, Moyes could give the Dutchman twenty to a half hour of play to please those in attendance. After his brilliant first season with United, he needs a supporting cast as he cannot carry the squad as he had last term.

We then turn our attention to Danny Welbeck who missed plenty of chances last weekend, but should get the nod once again. Moyes recently stated that Welbeck will play a key role in United’s title defense this season but, needs to be much more clinical in front of net. Although he gets himself in the correct positions, he is not the goal-scorer that Ferguson nor Moyes ask of him – which we hope will change this season.

In defense, it’s been indicated that Phil Jones will get the starting nod, but as to where remains to be seen.Jones could feature in defense or in the midfield, but featuring alongside Johnny Evans could be the most desirable option to giving both young defenders time to develop some sort of partnership in the center of defense. Featuring Jones in defense would also allow for younger members of United to feature in the midfield such as Adnan Januzaj, Wilfried Zaha and Ryan Giggs.

Most importantly we must remember these matches are only pre-season matches, and the goals will come. Disappointingly enough in Bangkok, United recorded no goals in what looked to be a bland match. With a rigorous week of training behind them, and one promising link to Barcelona’s Cesc Fabregas, Manchester United will look to put on a show in Sydney.

One response to “Preview: United vs A-League All Stars”