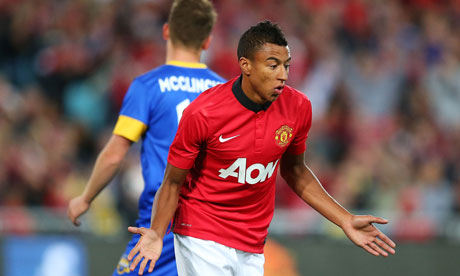 Jesse Ellis Lingard. Not exactly a traditional or household name to many Manchester United fans. And why would he be? Yet to make his professional debut for United, you’d be forgiven for not knowing too much about the Warrington born lad.

Yet Lingard will go down in history, as the first goalscorer of David Moyes’ tenure. He showed composure to score that goal, a calmly executed finish into the bottom corner preceded a ferocious hit into the top corner for his second goal in a 5-1 victory.

He showed glimpses of his quality in the outing which fitted the description of his style as written by the club website, “A clever and assured finisher, he is capable of mixing the spectacular finish with clinical, well-placed shots, he causes problems for defenders with his direct running,” is how he has been described.

Lingard has impressed those who watch him on a more regular basis than many, he has been touted as one of the best youth products in our current crop, running Adnan Januzaj close in this respect (Januzaj is another who has already impressed on tour and been promised a role in first-team action this year).

This is not the first time that Lingard has found himself whetting the appetite of United fans. There is nothing better than seeing academy graduates make the successful step up to the senior side, as we have seen with Jonny Evans, Tom Cleverley and Danny Welbeck as the most recent examples. But Lingard also caught the eye on our tour of South Africa last year, scooping the man of the match accolade against Amazulu.

Unfortunately, Lingard did not kick on as many had hoped. A lot of us were longing to see him make his debut under Sir Alex Ferguson, who has played a massive part in his development, however this failed to materialise.

A loan spell to Championship side Leicester ensued, but with mixed success and impact. Lingard promptly returned and played a key hand in us winning the U21 elite development league under Warren Joyce’s guidance.

David Moyes has already been clear in his philosophies that he is a keen advocate and developing young talent and as such maintaining the United imprint that has stood for generations of nurturing academy players with a view to making the grade.

In this respect, Lingard has a massive opportunity to force Moyes’ hand and counteract the possibility of being shipped out on loan to further his education.

He has more tour games to enhance his burgeoning reputation, let’s hope for more of the same.