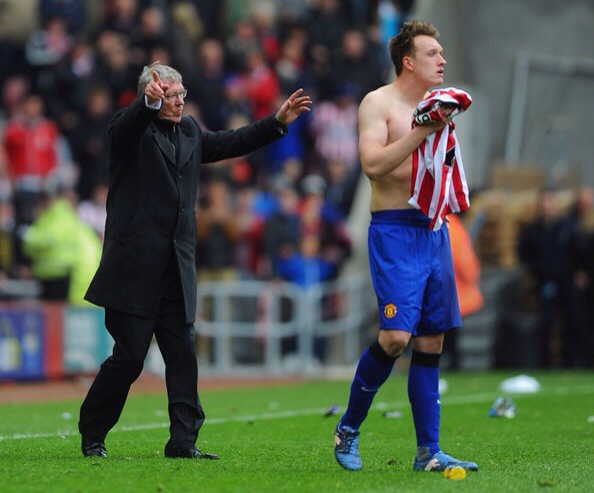 As we’ve been graced with Sir Alex Ferguson for nearly 27 years, memorable moments of both his teams performances and his infamous Fergie Time gestures make it near impossible to pick just one. Of course I remember Mark Robins’ winning FA Cup goal against Nottingham Forest, or Ryan Giggs’ mane on his chest after pure elation in the 1999 FA Cup. And yes, I’ll without question miss the Fergie Time watch checks and badgering of the fourth official wherever he went, but my all-time favorite Sir Alex moment occurred on May 13th, 2012 – Reconstruction Day as I like to call it.

May 13th, 2012 goes down as one of the most cruel moments in United’s history, but Fergie’s reactions and determination tear at my heart strings.  Losing the Premier League title in the dying moments despite doing their part, took quite some time to recover from especially as City overcame us that year.  The last five or so minutes were agonizing and I specifically remember where I was: United one-up on Sunderland with about one minute left in added time I was comfortable on my couch.  Legs were propped up, City were down two goals with around three minutes left and then, the unthinkable became reality.

Had Dzeko really just scored? Were Queens Park Rangers about to blow our 20th Premier League Title? The clock ticked. Ferguson began to check his watch a bit more frequently than usual, a bit more suspect than usual, and something in his eyes motivated me. The man who’s been in charge of the reds for my entire lifetime sat in his seat, hands tightly clasped and chewed his gum at an unsettling pace.

The moment City leveled up against QPR, Ferguson seemed to have a sixth sense about it and took to his feet. At this point, I’d already brought another television into the room to simultaneously watch both matches, and the reactions. Sir Alex imposed himself on the sidelines as he orchestrated his men to be tight on defense. The clock ticked – we’re in Fergie Time.

Never once was a doubt in my mind that we’d lose the Premier League in the 2011/12 season because Ferguson, despite looking abnormally unsettled, brought me back to earth. My eyes glued not even an arms distance away from the television – by now I was on my knees trying to will United to the title.  I looked on as Fergie looked towards the stands to get any indication whether or not his side were champions. The congratulatory shakes were in order with Sunderland, and pure ecstasy turned to confusion, which then turned to determination among United.

My childish emotions took over and shed a tear when Aguero clinched it. The next moment, I’ll never forget. Although I wasn’t physically present on the final day of the 2011/12 campaign, I saw something in Ferguson I’d fallen in love with.  The Scot urged his players to thank the crowd and now it was time to look forward. After losing a heartbreak of a finish to none other than their Manchester rivals – Sir Alex seemed to know all would be right in world.

During my entire life supporting Manchester United I cannot say I’ve truly experienced a downtime with United. Success has been readily apparent over my lifetime, and through the ups and downs, Ferguson taught me to be a man. Not once did I see him sulk his head, and although he looked puzzled at what just happened, not a shadow of doubt in my soul thought we’d do any less than win the Premier League in 2012/13. A lightbulb went off nearly a year ago for me in that loss. I’d seen United win the Premier League before and triumph over Chelsea in the Champions League final and countless others, yet this excruciating loss – brought me closer to Manchester United.

From the look in Ferguson’s eye I knew he’d finish his career the right way. A little over a year ago, Fergie drew his men from the pitch as if to say “Lads, we’ve got work to do.”