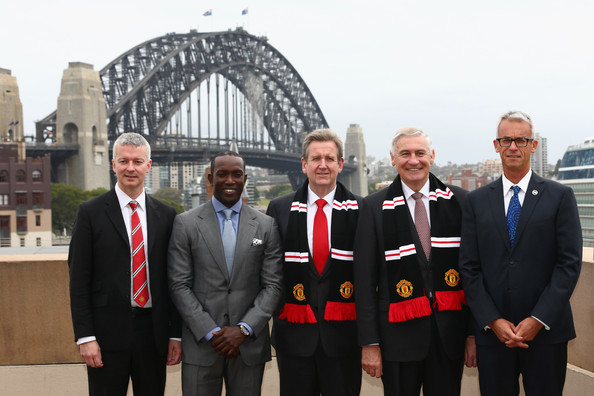 Ahead of our pre-season friendly against the A-League All Stars, Neil Sherwin from Back Page Football has put together a piece offering SN readers background on each of the players we’ll be up against. The Irishman has lived in Perth the last 6 years and has covered Australian football closely ever since.

The first thing to consider when looking at the A-League All Stars is that it’s not in fact the A-League All Stars. Marquee men Alessandro Del Piero, Emile Heskey and Shinji Ono are ‘unavailable’ for the game against Manchester United, while the likes of 2011/12 standouts Mat Ryan and Trent Sainsbury have transferred out of the A-League since the season ended in April and Patrick Zwaanswijk has retired.

Consequently, a lot of the players in this finalised squad have benefitted from simply not being injured, on international duty, or on holiday.

Originally, the public were given the chance to vote for the players they wanted to see take on United and their top 35 were to be put to a panel of experts for the final part of the selection process.

However, some of those in the squad for Saturday’s game didn’t register enough votes from supporters to make their shortlist, and the build up to the game has seen plenty of disgruntled feedback over the pointlessness of the public vote.

The A-League and its governing body, Football Federation Australia, has seen the light and taken measures to ensure that player contracts will in future include a clause stating that participation in the All Star game, like internationals, is mandatory if chosen and uninjured.

Once you get over that mess though, the visit of Manchester United to take on the first ever A-League All Stars squad is a huge deal for football in Australia. Sydney’s ANZ Stadium, with a capacity of 83,500, sold out rapidly such is the popularity of both United and the Premier League.

Each of the ten A-League teams are represented in the 20 man squad, giving all fans a vested interest in the game even if they won’t be in attendance.

Here is a look at those who will be involved next weekend.

Arguably the best coach in Australia, Postecoglou was the right choice to take charge of the A-League All Stars. With 36.8% of the public vote, he just pipped Western Sydney’s Tony Popovic (36.2%) as well as Central Coast’s Graham Arnold (15.4%) to the gig. He led Brisbane Roar to back-to-back Grand Final victories before taking over at Melbourne Victory last season and instilling his brand of free flowing football. Postecoglou is next in line in many people’s eyes for the national team job once Holger Osieck’s tenure ends.

A former Socceroos international, 38 year old Covic played in Europe for more than a decade with the likes of PAOK Salonika and Hammarby. In 2011 he joined Melbourne Victory and his superb performance between the posts earned him the club’s Player of Year award before a switch to Western Sydney Wanderers at the start of last season.

The artist formerly known as Michael Theoklitos (he legally changed his name to ‘Theo’ in 2012) is a very good goalkeeper but isn’t fondly remembered by fans of his former club, Norwich City. Theo conceded seven goals against Colchester United on his debut for the Canaries and was demoted to third choice. He never played for Norwich again and his contract was terminated in 2010, allowing him to return to Australia.

It took Topor-Stanley a few years to find a level of consistency but that issue has been resolved since his move to Western Sydney in 2012. Arguably the best central defender in the league over the past 12 months, his partnership with Michael Beauchamp was key to the Wanderers having the A-League’s best defence last season.

A strong centre half with plenty of European experience, the 32 year old was Western Sydney’s inaugural captain last season. Celtic fans will remember Beauchamp from their Champions League tie with AaB of Denmark in 2008 when he was incorrectly sent off in a case of mistaken identity. He has been capped 22 times by Australia.

Boogaard is a contender for the most surprising inclusion in the All Stars squad and benefits from Eugene Galekovic and Dario Vidosic’s international commitments to be one of Adelaide’s representative. The 26 year old is a solid if unspectacular centre half and should be used as cover from the substitutes’ bench.

At just 18, Chapman is the youngest player in the squad and represents the Jets with the likes of Emile Heskey, Ruben Zadkovich and Mark Birighitti unavailable. The centre half has a promising future ahead of him and will be looking to build on his 15 A-League starts in 2012/13.

Given Australia’s problems at left back in recent years, it is criminal that Rose has not been given a chance by national team coach Holger Osieck. An attack minded full back, he has been a model of consistency for the Mariners and was their 2010/11 Player of the Year.

The self-confessed Liverpool fan is an excellent young defender who has made the right back slot his own at Perth Glory over the past two seasons. Known for his tenacity and tough challenges, the 20 year old has been included in some Socceroos training camps and a full cap is only a matter of time.

Bojic played opposite Josh Rose at right back for the Central Coast Mariners in recent years before completing a switch to Sydney FC this offseason. Extremely fit and excellent going forward, the 29 year old is handy from a dead ball and will be a danger from free kicks around the edge of the penalty area.

The 2012/13 season was a breakthrough campaign for Grant as he cemented his spot in the Sydney FC starting line-up. One of his best attributes is his adaptability and he has played right across the backline as well as in midfield. Grant played in the 2009 FIFA U-20 World Cup and has since represented Australia at under 23 level.

The quick-footed Kiwi has really blossomed in recent seasons and was one of the standout players as the Mariners took out last season’s Grand Final. Comfortable with both feet, McGlinchey is one the most creative talents in the A-League and could be the man to unlock United’s defence.

Probably the most recognisable name to Premier League fans, Emerton enjoyed a successful spell of more than eight seasons with Blackburn Rovers after cutting his teeth in Europe with Feyenoord. His return to Australia in 2011 was seen as a massive coup for Sydney FC and the A-League as a whole, however his performances generally haven’t been to as high a standard as expected.

The Argentine winger was a late call up to the squad after Western Sydney’s Youssouf Hersi was ruled out through concerns. Last season was 29 year old Carrusca’s first in the A-League and he performed well, scoring five times in 23 games for a struggling Adelaide side.

The Brisbane Roar playmaker is one of the most talented individuals in the A-League and picked up the Johnny Warren Medal for being the best player of the 2011/12 season. A key member of the Roar side that went a record breaking 36 games unbeaten under Ange Postecoglou, Broich is predominately right footed, likes to cut in from the left hand side, and delivers an excellent dead ball.

It’s fair to say that United fans know all about Miller after his spell at the club a decade ago. Since then, the Irishman’s career has taken him to the Championship in England, the Scottish Premier League and now the A-League. After two seasons with Perth Glory, Miller has signed on with Brisbane for the 2013/14 season and still possesses a great eye for a pass from the middle of the park.

Central midfielder Celeski has enjoyed something of a rejuvenation under Ange Postecoglou at Melbourne Victory. After four up and down seasons with the club that included time on the sidelines with a ruptured anterior cruciate ligament, Celeski finally found some consistency during the 2012/13 campaign and was one of Victory’s best players. Calm and composed on the ball, he has one Socceroos cap to his name.

Ifill was a member of the Millwall side that lost to United in the 2004 FA Cup Final, and he played over 200 times during his seven seasons at The Den. Spells at Crystal Palace and Sheffield United followed before he joined the Nix in 2010. Since then he has scored an impressive 31 goals in 95 games.

Berisha is that player you love to have in your team but despise when he’s playing against you. The Albanian international has an excellent goal scoring record in the A-League since moving to Roar in 2011. His brace in the 2012 Grand Final gave Roar a come-from-behind 2-1 win over Perth Glory. He has previously played for Hamburg and Arminia Bielefeld in Germany, Rosenborg in Norway and Burnley.

After netting nine times in 23 games for Sydney FC in 2009/10, Bridge’s form plummeted and he scored just four times in the following two seasons. A switch to Western Sydney helped the 27 year old find his form however and he scored a career high eleven goals last season.

Williams burst on to the scene back in 2009 with the now defunct North Queensland Fury, exhibiting an exciting combination of pace and trickery. He became the first indigenous player to represent a Melbourne club when he joined Heart in 2011. Since then he been in and out of the team but on his day is a threat to any defence in the league.