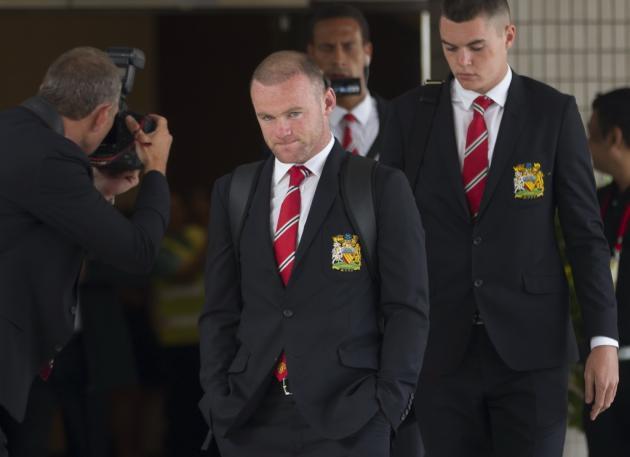 ‘Angry and confused’. When Wayne Rooney staggeringly handed in a dumbfounding transfer request in 2010, yes we were exactly that. ‘Angry and confused’. ‘The biggest mistake in my life’ was how Rooney summed up that expensive rollercoaster of emotions. ‘What happened will not happen again’ he said defiantly, seemingly set up for life and immortality at the club who bust guts and sweat to keep a stubborn and confused Scouser side by side with his parasitic crook Paul Stretford in connection with our great club.

Yet here we are almost three years on. That very wretched tediousness, the stigma, the can of worms has been opened once more. It is Rooney, if the Sky Sources scatter-gun approach is on the mark, who is ‘angry and confused’. ‘Angry and confused’ on his small sum of £250,000 per week, beggars belief in short. Genuine United legend Gary Neville said he would ‘stand in a bucket of water for two hours a day if it meant playing just once for United’, if only players played like fans like Neville was. Was all the badge kissing from Rooney a myth, a delusion, a con?

In 2010 Rooney questioned the ambitions and prowess of the most successful English side, a side that invested effort and time to not only secure his much sought after and coveted signature but also to develop and fashion him into the world-class, passionate, hungry individual he became at the peak of his powers.

He and his freeloader Stretford got exactly what they desired, every last possible penny from the coffers and the playing aspect saw us secure the services of the Premier League’s best striker in Robin Van Persie.

I, for one, was quick to forgive and forget the acrimonious and animosities that had occurred in that hellish couple of days when it dawned that United could potentially lose their only world-class player at the time. A time when we had lost the talents of Ronaldo and Tevez, keeping Rooney was the most paramount objective. That overhead winner against the old foe went a long way to forgiveness and has justifiably earned himself a place in United folklore. Rooney said he had not had a bigger buzz than looking up at the ball in the roof of Joe Hart’s net, Hart stood motionless. A legend in the making surely?

He built on that road to redemption with ferocious finishing in the 2011-12 season, which saw him bag a stunning 34 goals and propelled him to 4th on our all-time scoring charts.

2012-13 was a story of Jekyll and Hyde for Rooney. His relationship with Sir Alex Ferguson had it’s stunning highs, fractious moments and desperate lows. Ferguson’s last year in charge also saw relations sour over- Rooney was deployed in centre-midfield, continuously substituted, left out of crunch games (Real Madrid sticks out like a sore thumb for many unpleasant reasons).

Now supposedly a player earning £250,000 a week should be in the higher echelons in terms of squad status, it should be the peak of his career, the zenith of his powers. However, Rooney was sub-par for the most part. His ego would have been deflated by the marquee signing of Van Persie, he was no longer the main man. Rather than relish the added competition, after all it’s what he wanted, he looked lethargic, disinterested, unfit, passionless, spark-less at times. £250,000 a week for not pulling your weight, thanks but no thanks.

One cannot help but conform to the conspiracies that Ferguson sold Rooney down the river, stitched him up for the audacity to question where the club was going under his proven direction. Did Ferguson want to punish the naivety and callousness of doubting the greatest manager to have lived? Probably.

What transpired in the meetings between Rooney and Ferguson we are not privy to, however we all know who has come out of it all playing the villain. I think most of us chose to forgive the first transfer request, but to have the cheek to even contemplate leaving the club that sapped it’s energies to stick by him for a second time, that is deplorable and inexplicable.

Whether the story that Sky Sports News broke at around 5.50pm was with a view to achieve better ratings and viewings remanins to be seen. The report from said ‘sources’ was lacking in precise detail and hard-hitting accuracy- resorting to saying ‘mentally he’s drained but physically he’s on the mend’. Sounds like a load of tosh doesn’t it?

Nevertheless, Rooney’s stance is lacking insight, as his position has had status quo for the past year now. From the outset, Ferguson affirmed that Robin Van Persie was the focal point in attack. Rooney has played in the withdrawn role for donkey’s years now, he has rarely played as the target man up top under Ferguson- his boyish eagerness and work-rate meant he was always coming deep to collect the ball anyway. He just needs to realise this, wake up and smell the coffee.

Either way, this unnecessary saga has reared it’s head and is almost reaching untenable levels. At a time when we should be occupied continuing to address Rooney’s previous gripes by adding quality names and focusing on pre-season, we are dealing with an issue that is deja vu. David Moyes has got a big enough baptism of fire as it is replacing Sir Alex Ferguson, this extra baggage has not helped the start to his tenure.

It has gone on too long now, so much so that it could become harmful for morale and unity. Each player will have differing takes on the situation so it’s important that this mess is concluded swiftly.

Some last thoughts about Rooney are taken from his own autobiography:

‘My mind goes into spin, I feel gutted at what I’ve done. How stupid are you Wayne? What are you doing? You love the club, fans, respect the manager who’s got you trophies and titles, you couldn’t be anywhere better’. You just need to prove to them your heart is at Old Trafford, convince them to forgive you’. ‘You’d be mad to leave, there’s no better place to play than United’.

Those were Rooney’s words, maybe he needs to look closer to home.

Rooney could either knuckle down, respect the mega contract he stropped about and attempt to eclipse Sir Bobby Charlton’s record- Rooney is only 50 odd goals away, or if he leaves his efforts, 197 goals and trophies will be tarnished and ignored by his petty antics.

No player is too big to be shown the door at United, ask Keane, Beckham, Stam and Van Nistelrooy. Rooney was the exception in 2010, we could not afford to lose him then, but now we can.

Be careful what you wish for, Wayne,

2 responses to “Be careful what you wish for, Wayne”