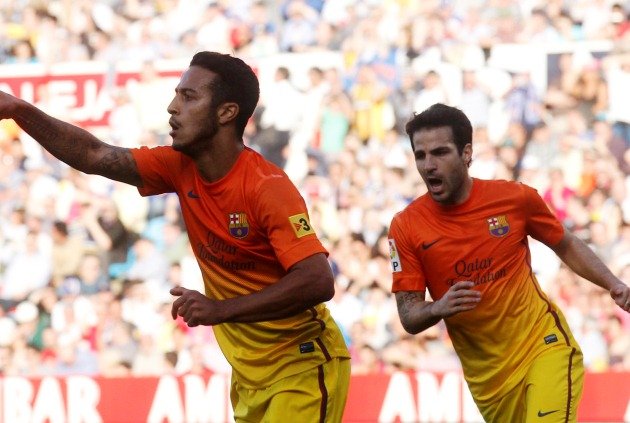 You would not want to be a Manchester United fan when the transfer window is in full effect. Saga after saga, rumour after rumour. Bitter aftertaste after bitter aftertaste, this inscrutable truth can only be exemplified with the fresh wounds of yesterday’s news that Bayern Munich had pipped us at the post in the Thiago Alcantara chase- after all, Guardiola’s troops are lacking in midfield! We all thought ‘Scheiße’ as the soap opera concluded with the usual messy, sour end.

As the anguish and spewing reverberated prodigiously through social media, attention quickly shifted to other idealised, Utopian targets. In other words, the typical United optimism was brimming through the keyboards as many predicted knowing our luck we’d get beaten to to the signature of Cristiano Ronaldo by Wigan. Ahh Twitter.

In all seriousness, once the Thiago news had filtered through, there was universal conformity that United needed added personnel in the engine room and that David Moyes was going about his business in the right manner by looking to avenge the midfield ghost of Ferguson’s past.

We, as United fans, have been lucky to have got exactly what we richly deserve- title after title, laden in success, but surely it is not too much to ask for that golden ticket of a central-midfielder. Michael Carrick really does need a companion in the heart of our midfield.

The insouciance and lethargy from Ferguson in failing to address the area of concern has left David Moyes not only filling his massive shoes but also the said Achilles heel. Much to Wayne Rooney’s disgruntlement and disdain, he was deployed there during the run-in of 2012-13 with varying levels of effectiveness, adaptability and overall success. Ferguson knew that the midfield was the grey area but not since purchasing the brilliant Canadian sick-note Owen Hargreaves have we witnessed a signing in this department, infuriating I know..

The time that has elapsed has almost eclipsed Arsenal’s dusty trophy cabinet, but all that irritation and vexation will be alleviated with a significant recruit to ease the creative burden on a poor Geordie’s shoulders.

Moyes has already picked up on our frailties and scarcities in midfield by identifying potential targets. For Premier League champions we do not possess the plethora of midfield options that our rivals can boast. That makes the achievement of regaining what is ours that more impressive, but has a Jekyll and Hyde effect- merely papering over the cracks that are there for all to see.

By pinpointing Thiago and his ex-Barcelona maestro Cesc Fabregas, Moyes has set his stall out on finding someone who has creativity running through his veins, in short the next Paul Scholes.

The news that emanated on Monday lunchtime was that a bid had indeed been lodged for Fabregas. When I suggested last week that Fabregas would be the contingency plan in case we did not prevail in our Thiago attempts, I was greeted with derision and scoffing. Now the news has come through, disbelief, suspicion and pinch of salt are the buzzwords as far as initial reaction was concerned.

They say there is no point crying over spilt milk, seemingly Moyes is of that persuasion and a firm believer in that maxim. The Thiago news albeit inevitable was equally hard-hitting, the doom clouds were lifted slightly upon hearing today’s breaking developments.

If David Moyes was unsure about the nature of the Manchester United beast, he has a better idea now after fielding several enquiries about the future of Wayne Rooney and Thiago. Moyes was adamant that Thiago was never a target, going on to say that he was looking for top players, clearly Thiago did not fit this bracket.

Fabregas however certainly fits the bill and would be the perfect acquisition to bolster our midfield. His honeymoon period with his boyhood club is well and truly over, things have not gone entirely swimmingly as he would have liked. Although figuring prominently in terms of statistics, these are deceiving with the bulk of his game-time coming off the esteemed Barcelona bench. He has played a peripheral role, a subordinate to the geniuses of Xavi and Iniesta.

Without the slighest doubt, Fabregas would stroll into our midfield presently. Notwithstanding Michael Carrick, we are bereft of a player of Fabregas’ ilk- someone who is proven at the highest level and genuinely world-class.

The epitome of true quality, we should go hell for leather to buy either Fabregas or Luka Modric, if the transfer war-chest is to be believed we could feasibly break the bank to lure one of the two from the El Clasico rivals.

The Fabregas deal though appears complicated. Unless it is merely a comfort blanket to Arsenal’s bleak period, it is alleged that they have first option on Fabregas to make a romantic return to England for around £25M. This is also the figure touted for United’s opening bid. Although it is seemingly below Barcelona’s valuation, the offer is being considered.

With the cheque book ready to have ink in it, signing Fabregas would be a huge statement of intent and would go a long way to appease the restless fans who are understandably frustrated with the lack of movement thus far.

A lot of hard work will have to go in to secure Fabregas, especially as he is under no pressure to left due to Thiago’s well-known departure and the Arsenal factor.

Fabregas or no Fabregas, whatever the outcome Moyes should be applauded for being proactive to address a critical area.

This saga, for want of a better word, will run and run.

6 responses to “Every Thiago cloud has a Cesc lining”