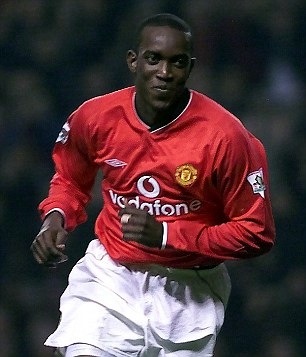 Nicknamed the Smiling Assassin, Dwight Yorke certainly made his impact with Manchester United during his short, yet successful career (1998-2002) at Old Trafford. From the small world that is Trinidad and Tobago, Yorke made a name for himself with his clinical finishing and his ever-present smile. Now at 41, the club still is close to his heart and spoke to The Daily Telegraph about United’s tour to Australia this summer and his thoughts on David Moyes’ appointment. After his fair share of football and in particular his record six World Cup’s (1990, 1994, 1998, 2002, 2006, 2010) rarely was a frown upon his face. In today’s modern era, footballers more often that not have the serious and “game-faces” on at all times, but not Dwight Yorke.

Seemingly enjoying every moment of his career, Yorke’s fresh air attitude to the world of football was and still is splendid. With that ear-to-ear smile exposing those pearly whites, Yorke was always down to business when match-time came around; however, hate him or love him – he always seemed to love what he did. And the glass-half-full mentality paid off in his first season with Manchester United as he was a part in the unique title winning season in which he established a connection with the legendary Andy Cole. Finishing joint top-scorer in the league with 18 goals, the Trinidadian left his mark. In the 1999-2000 season he added another 22 goals in all competitions but shortly after fell out of favor with Sir Alex Ferguson – and sadly enough signed elsewhere in 2002 with Blackburn Rovers.

We’ve all questioned from time to time whether or not David Moyes is the right man for the job, and if the current make-up of players at United will fit the bill. Yorke recently opened up to the Daily Telegraph as United begin their summer tour and speaking about their upcoming trip to Australia as well. When asked about Moyes’ appointment Yorke explained: “I believe that David Moyes will want to keep it as business as usual. The team will be playing to win, no matter who the manager is.” Rightly said from Yorke – who understands that friendly or Champions League final, the Manchester United organization from the front-office staff to the players and manager, to fans worldwide, that wins are vital. Who wouldn’t love to see the beginning of Moyes’ managerial career with the best club in the world, start with a win.

However, Moyes and Manchester United will be under close eye with their first new manager in over 26 years. With Sir Alex Ferguson in retirement, United will have plenty to prove this upcoming Premier League campaign and their defense of the title begins this summer. Yorke indicated that “going into the new season as the title winners, there will be some wanting to see us knocked off our perch, so they will be keeping a close eye on the team’s first few matches.” With the likes of Manchester City, Arsenal, Tottenham, and Chelsea all looking to overcome the Premier League champions, starting off on the right foot is crucial for Moyes’ men.

And as United settle into Thailand for a bit, it’s important the squad to not get too comfortable as the beautiful Sydney, Australia is ahead. With beautiful weather, and a top rated travel destination, the former reds frontman indicated the tour will be mutually beneficial to both the English club and Australia. He noted “Sydney will be a special one though, as it’s such a great city and backdrop to the game.” Respecting the work ethic of Moyes and the current squad, this tour will give some sort of glimpse into the partnerships that could come to fruition this season. In the meantime, enjoy the weather you reds, because we’ve got a grueling title defense season ahead.