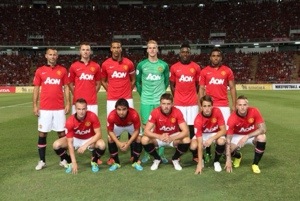 In the great humidity and punishing conditions of Thailand, Manchester United came out of the gates to be expected – plenty of chances and a few telling moments from some of the younger players. With their first match of their United Tour, David Moyes’ chosen starting XI began the process of getting the rust off their boots against a defensive display from the Singha All-Star XI.

The brightest on the radar for Manchester United in the first half in particular was the youngster Adnan Januzaj certainly looked the part on the evening. Clever and confident on the ball, Januzaj connected well with Anderson and Danny Welbeck – and seemingly never feared to take his opponent on in 1v1 situations. His appearance in the first match under Moyes indicates that no matter how young you are, you’ll be given a chance with United and this lad made an exceptional case to be included more in the first team for the upcoming Premier League season.

Breaking down the Singha All-Star XI was always going to be tough as they were quite content sitting back on defense making it extremely difficult to find space. With United probing away in the first half, there were no clear chances in the early stages of the match. In the 22nd minute, Fabio sent a telling cross into the six yard box which found the streaking Januzaj perfectly; however, his attempt went skying over the net. Nearly eight minutes later in the 30th minute, Welbeck neatly beat his defender and attempted to round the keeper yet, his touch was not strong enough.

The 34th minute saw something we’ve been looking out for, for quite some time – to see the reds play with Rafael and Fabio da Silva on either side of the defense. Rafael made way for Alexander Buttner ten minutes before halftime as Buttner seemed to take a knock as he clutched his right hamstring.

Apart from that bit of unsettling news, United was caught trying to play the striker offsides, forcing Ben Amos under immense pressure. In the 36th minute, Amos made a wonderful save as the Singha forward beat the defense and lasered a shot, forcing a brilliant save out of him. Johnny Evans had been defending well, but was caught a bit slow in the recovery at times – without question his full match fitness will be regained in the coming weeks.

The second half began much like the first – plenty of possession for United but little goalscoring chances. The lack of attacking threat turned against United in the 50th minute as the Singha All-Star’s took a shock lead by a goal from Winothai who on the night was Singha’s best overall player. Immediately following the goal, United upped their tempo and unfortunately were unable to create quality chances.

At times, the reds looked too direct into the feet and through balls to Welbeck. The tight defensive work from Singha did not allow for the Englishman to break often. With the lack of chances, Moyes made a triple substation with around 25 minutes to go bringing on Phil Jones, Wilfried Zaha and Lingard for Giggs, Anderson and Cleverley.

We were given our first glimpse into what Zaha can do with his blistering pace alongside the flanks. The newly acquired United winger did well on numerous occasions with Rafael, and was almost rewarded for his efforts. The three best chances came in the final 15 minutes as Welbeck scorched his attempt way wide in the 81st minute, followed by a beautiful bit of skill from Zaha in the 82nd. Zaha’s shot pinged off the far post as he sent an inch-perfect left-footed shot off the bar.

With that, United fell in their first match under Moyes, but let’s not get ahead of ourselves. In the first preseason match, it is expected there will be kinks in the armor of United and as Singha placed eight to nine men in the box at all times, it made matters nearly impossible for United to find a quality chance. As Manchester United players, managers and supporters alike never want to lose a game – after all, this is still preseason and the best is yet to come.