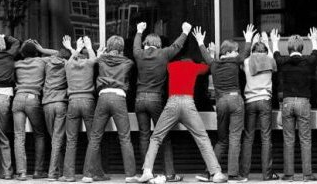 Everyone knows the exact details of their first ever United match; the opposition, the score, the date, you name it. My story’s a bit hazier than that. Not because of booze or drugs (I was a little kid), but because I visited Old Trafford several times on matchday before I ever actually went inside. The reason for this was that my cousins lived in Ordsall, virtually round the corner from United’s ground, and they’d join the red and white carnival every other week just for the hell of it. Whenever we visited on a Saturday, I’d tag along. But I was by no means innocent.

As a kid, I lived in Langworthy, on Laburnum Street, along with more of my extended family, some of whom lived in the adjacent Fir and Ash Streets. The walk to Ordsall wasn’t considered particularly far, and we often ambled between the crofts and new tower blocks of Pendleton to visit our less fortunate relatives. Going to Old Trafford with a ragtag mob of local kids who were more excited about “car minding” money than the match was my personal introduction. I was never a big money hog, though, and I really wanted to penetrate those mysterious turnstiles and see the hallowed terraces for myself. I didn’t care about the shrapnel my cousins and their gang coveted. I wanted to see United.

When I was about 10, myself and a mate decided to stowaway on a ship at Salford Docks and sail to America. We met after school in Prestwich and journeyed toward the general docks area by bus. Unfortunately, United were at home that night, and we were quickly sucked into the human maelstrom swirling towards the ground like masses of red and white debris down some inexorable plughole.

I fantasized about the nature of Old Trafford for years. I dreamed of towering glassy structures, smooth white moulded concrete, escalators, transparent turnstiles and steep plastic slideways that enabled supporters to vacate the stadium at high speed. Even though I’d been there several times, I’d never breached the giant walls. My tormented imagination was running wild.

Finally, my Uncle Geoff took me to see United vs. Middlesbrough in October, 1978. I was 12 years old, which is quite old for a first match. By then I’d been to Maine Road and Turf Moor, to see City and Burnley (who were a top club at the time), but because of supposed hooliganism and danger I’d been denied access to OT. It wasn’t the most amazing match. United won 3-2, with Lou Macari (2) and Joe Jordan scoring the goals. To be honest, I wasn’t that bothered about the score; I was consumed by the idea that this was an evil deathbowl packed with Manchester’s worst criminals, all aching with the need to inflict pain on others. In 1978, this wasn’t really true. It was the deadpool between the glam-rock mayhem of the earlier 70s and the sudden emergence of the so-called casual movement.

It was a sunny day, more late summer than autumn. We stood on the halfway line in United Road Paddock. I spent most of the match shading my eyes, meerkat fashion, gazing at the mad silhouetted darkness of the Stretford End. That was where most of the singing came from, though I was surprised to hear numerous chants from the Scoreboard End and, most significantly, the Scoreboard Paddock. Uncle Geoff was kind enough to inform me that the Stretford was a joke by then, and that most of United’s “boys” had migrated to the away end of United Road. This was a bloke who’d spent the summer of 1977 travelling and ragging the continent, who wore an ace pair of Adidas Bali, and whose stories of jibbing, fighting and pulling were brilliant. Despite growing up in Weaste, on the banks of the Manchester Ship Canal, Geoff and my nana and granddad had been moved by the council to Newbank Tower, a block of flats in Greengate. They were on the 2nd floor, but were then moved again to a maisonette in Cheetham Hill, and then back to the 8th floor of Newbank Tower. Throughout that time I envied his regular attendance at matches and was thrilled when he gave me my first ever United scarf. It was a red and white lambswool job, originally intended for the Salford Rugby League team.

I suppose I was lucky that United won my first ever game, but to be honest I was more interested in the crowd and the stadium than I was in the game itself. I latched onto every shouted obscenity and laughed and laughed. I’d spent so many years fantasizing about the interior of Old Trafford that absorbing the atmosphere and taking in all the raw humanity was infinitely more important to me that day. Having said that, it was amazing to see the likes of Sammy McIlroy, Steve Coppell, Gary Bailey, Arthur Albiston and Brian Greenhoff in the flesh. I idolized those men, and the first moment you are stood inside the ground, inhaling those strange grainy aromas from Trafford Park and Ordsall, is a milestone in the life of every true United fan. I remember going to the match against West Ham in ’07 when Tevez scored to keep them up. As United were handed the Premiership trophy and the razzmatazz ensued, I inhaled that same cornflake smell, marvelling at how some things never change.

Follow Ian Hough on Twitter and buy his book on the casual gangs of Manchester and Salford.