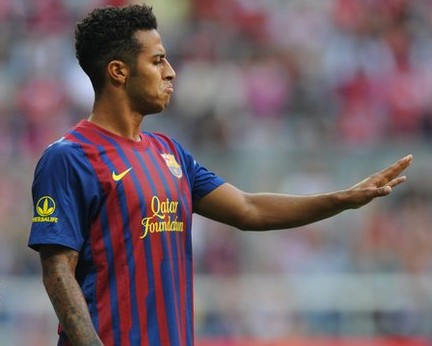 The first elongated transfer saga of the summer looks to have reached a painful and unsuccessful conclusion, with many media outlets reporting that we had missed out on long-term transfer target Thiago Alcantara.

Pep Guardiola, despite lambasting the boardroom executives of his previous club Barcelona, was not shy to declare his admiration and Bayern Munich’s interest in the Spanish Under 21 captain, saying that it was ‘him or no-one’ and he was looking for ‘that something special that Thiago provides’.

Despite our staunch beliefs that Thiago will not get the first-team football he requires if he wants to realise his dream of appearing at the 2014 World Cup in Brazil, the deal to Bayern on the face of it could have been coming for a long time: his agent is Pep Guardiola’s brother and of course Guardiola mentored and nurtured him into the Barcelona XI.

Although Sky Italia intially broke the story they subsequently retracted their story, but went on to state that the deal was at an ‘advanced stage’. The events of today were slightly ambiguous and confusing, but it seems as though our drawn out pursuit of the youngster has been forlorn and not enough.

If he does head to Germany, Thiago will join heady and illustrious company to reject United’s advances for various reasons.

Back in the days of Peter Kenyon in office, we tried hard to sign that flamboyant Brazilian Ronaldinho. Kenyon jumped ship for Chelsea and the deal collapsed. In this case, the cloud did have a silver lining as a certain Cristiano Ronaldo was unleashed and made into the world’s best.

In 2005, Lyon’s midfield powerhouse Michael Essien was touted as Roy Keane’s long-term replacement, only to snub us for Chelsea’s riches leaving us with a threadbare midfield.

We have fallen foul to Real Madrid on more than one occasion, we could have signed Mesut Ozil for a poultry sum of £8m and young French protege Raphael Varane was making a name for himself at Lens before choosing to further his career under Jose Mourinho. He joined his compatriot Karim Benzema on the list, Sir Alex Ferguson was a long-term admirer of Benzema whilst he was impressing at Lyon.

Last summer brought mixed fortunes, the arrivals of Shinji Kagawa and Robin Van Persie were inspired purchases, but our activity was marred slightly by the failure to land exciting wingers Eden Hazard and Lucas Moura. It seemed for all the world that the Belgian Hazard would join United, much like Thiago. However, knowing he had a more lucrative offer from Chelsea, their Champions League success made his decision easier. In short, Moura and his representatives were being mercenaries- an inflated transfer fee and bumper agent fees saw an end to that pursuit.

And, of course, who could forget the two year long will we, won’t he Wesley Sneijder saga? That episode put Eastenders to shame, how many times was he spotted at Manchester Airport and seen undergoing medical tests?

When Valencia were going through hard times financially when they had their golden team, their gem David Silva was close to joining us, we all know where he ended up.

We have suffered defeat over the years, and most of these deals were pretty bitter pills to swallow.  The failure to lure Thiago to Manchester feels like the most costly of all though. Everyone from you to your dog can see that centre midfield has been our Achilles heel for some time now.

We have missed out on the unmissable bargain with Thiago. He will go for peanuts in today’s transfer environment, it looks for all intents and purposes like we have missed the boat, which is now heading to Bavaria.

Various journalists have said that we were confident about Thiago and did all we could to get him, but the common denominator as you can see is our inability to dot the i’s and cross the t’s in the negotiating process sometimes.

Something is going wrong when you take a look at that select band of players we have missed out on- just read again- Ronaldinho, Essien, Ozil, Varane, David Silva, Hazard, Lucas Moura with Thiago likely to be etched into this unfortunate list. That is a lot of failed negotiating for quality individuals.

Who or what is to blame is not entirely clear, but it is hard to not ponder what could have been. Yes, United always move on and we are the Champions of England, but any midfield signing we now make will be deemed as a sub-par, second choice acquisition. Whilst our rivals are already strengthening to varying extents, we have signed an unproven Uruguayan right-back who will probably not be first-team material immediately and will need time to bed in and acclimatise to new surroundings.

Of course, it is still early days in the transfer window and David Moyes has barely got his belongings into his new office, but fans are concerned and particularly frustrated at not signing Thiago. This, of all seasons, is a season where we probably need to make a massive statement in the transfer market, and no doubt mega deals take time to be finalised and mooted.

Thiago was seen as an exciting purchase and one that fits the United model of being at the right age and the right type of player. So it was a bit of a hammer blow to read the reports that a deal with Bayern is close. Although only rumour, you would expect this deal to go through which would leave United going back to the drawing board (if we have one).

There are a whole host of midfielders out there being linked and mentioned- Eriksen, Verratti, Cabaye, Kondogbia, De Rossi, Modric, Fellaini. But for there being no shortage of names, we have become accustomed to disappointment in the transfer market.

Thiago was well-known to be Moyes’ primary target in the midfield stakes, although he may get this move to Bayern and be reunited with Guardiola, he may not get the minutes he wants to achieve his goals.

He could have been something special for us, I wonder who the next transfer saga will involve? Presumably a Belgian with an afro.