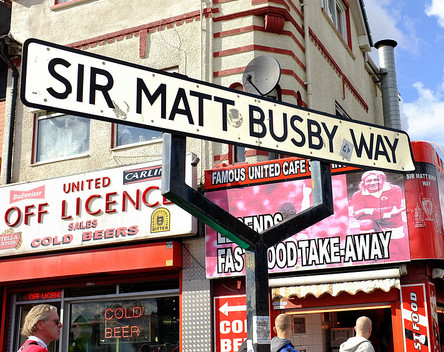 Chudi from The Busby Way was kind enough to sit down with SN and answer a few questions concerning Manchester United. Aspects covered range from Wayne Rooney, to David Moyes and of course – we even dabble in the controversial topic concerning the Glazer family. Whether or not everyone is in compliance with Chudi’s views and opinions there is a sense of honesty within each response, and the thorough understanding of the reds is readily apparent.

United are in a turning point in their history. As Sir Alex Ferguson inherited a relatively poor club nearly 27 years ago, Moyes now retains a club with the perfect mix of youth and veteran players, with the likes of Danny Welbeck and Ryan Giggs to name a few. And yes, let’s be clear despite Giggsy playing at 39 (feels like he’s been around 100 years already) he’s referred to as a older, veteran player now even though the Welshman is almost equally as capable to that of the younger generations  – well, maybe not in terms of pace.

Trust in every relationship is crucial to a budding relationship, partnership, marriage – what have you. Even though some may simply despise the Glazer family, we’ve stood behind the club who’s brought success in bunches – again, just ask Giggs.

Stepping away from Manchester United a bit, The Busby Way gives young journalists a few brilliant tid bits to becoming a successful and honest writer. During a time where social media has erupted, writers both good and bad have appeared nearly everywhere. From proclaimed masterminds, to collegiate aspiring journalists, to the every day fan – football is in our blood. So, if you’re interested in hearing what can be done to brighten the future with writing – you’ll want to check this out.

What’s your favourite away ground?

In recent memory I’d have to say Stamford Bridge, got some good memories in terms of United performances and was there for the brilliant FA Youth Cup game in 2011 that despite losing 3-2 saw an exciting game and saw brilliant support from our fans.

Currently it is Rio Ferdinand, I think he is an outstanding player and formed part of one of the best defensive partnerships the club has ever seen with Vidic. He’s a leader, and a Londoner like me!

Of all time it has to be Roy Keane. For me he was the epitome of a leader and everything great about him can be encapsulated in the tunnel incident at Highbury in 2005. There is a misconception that he was just a defensive midfielder but he was great all round; could pass tackle shoot (and score).

Most hated rival, and why?

Due to my age and where I grew up Arsenal were the bane of my existence. I remember getting ripped when they won the title at Old Trafford and going for a walk to clear my head after they beat us at Highbury when we were wearing the gold kit and Barthez made those mistakes.

As time has gone on I have mellowed towards them as they are no longer the threat they were, but I still dislike their fans and never pass up an opportunity to wind them up! Signing RVP was a God send!

Why start a blog?

I did my degree in English and half way through I decided I’d try my hand at writing after meeting with a lady called Celia Brayfield. I obviously love United but I’m also crazy about boxing and think a blog was the perfect way for me to put my degree to use as well as cover my love of both of these things.

Being a Cockney Red, does people’s obsession with location annoy you?

It does and it doesn’t. I’ve never had any stick from our own fans, but everyone else can’t get their head around the fact I support United. I’ve had all the usual stuff (glory hunter, armchair fan etc) and honestly I couldn’t care less, I’m not one for trying to prove how big a fan I am anyway especially not to opposition fans.

It is a toss up between Red Flag Flying High and Stretford-End.

I’m quite close with Justin who runs it (we’ve started our own joint venture Pride Of All Europe) but the decision was easy from how he runs RFFH. He has a plethora of different writers with different styles and opinions. Some sites like to tow a specific line but on RFFH you may get two differing opinions on the same matter which is always interesting as you get a much more rounded picture of the matter.

In terms of Stretford-End I’m a HUGE fan of Doron Salomon’s writing and knowledge of the younger players at United and it’s always good to get his insight on things. Stretford-End tend to do a more in depth look at matters and I think if you have more than a few minutes to sit, read and digest things about the club then the site is a gold mine.

Red Mancunian is slightly newer but is also a great source of information too I’ve found and quite frequently are first in terms of news.

What do you think of David Moyes as our new manager?

I think if you were told Sir Alex was leaving and you could have any manager his name would have appeared a fair way down the list, but having somewhat seen the plan of bringing him entails, I’m all for it.

Whilst football has changed hugely, his appointment could have a similar effect as Sir Alex as he will hopefully be here for the long term whereas some of the names mentioned perhaps didn’t have the same appeal in that instance.

I’ve seen his recruitment likened to what’s happening at Bayern Munich in terms of longevity and keeping everything in house (coaching appointments, Sir Alex staying on, ex-players involvement) and whilst we are our own club with our own identity, given Bayern’s current standing in the game if that’s the kind of infrastructure we are trying to put in place then its hard not to get slightly excited about what is to come.

Be brutally honest – what do you think of the Wayne Rooney situation?

After 2010, I was ready to forgive and, whilst not forget, put the incident to the back of my mind but it has happened again and this time it isn’t so easy. In the same breath it appears he is adamant that he did not ask to leave a second time and he has been stitched up by Sir Alex.

So to end this he can simply come out and clarify his position, I think when he is fit and bothered, Wayne is quality but the uninterested unfit Wayne isn’t worth the money we pay him in wages. The team is better with him in it, but the club have played their cards, now Wayne needs to make the right noises.

Thoughts on the Glazers?

I’m not a huge fan of the Glazers purely because of what I’ve read about them and how they treat the club but the counter to that is the team has remained successful and despite the huge debt are flourishing as a financial entity. Every week a new big money deal is announced the only issue with this is how much of that money goes to paying the debt and how much to actually strengthening the team?

With success people’s attitude towards them have softened, but you have to remember with Moyes now at the helm, success is not guaranteed and a few trophy-less seasons, which are now a possibility, could leave the club in ruin as managing the debt does correlate to on field success.

Lastly, the best bit of advice for young, aspiring journalists?

In terms of your work be consistent, but probably the most important thing is try to be well read. I think if you are able to put an alternative spin on things, it makes you stand out (I wrote a piece likening Sir Alex’s presser on Rooney wanting to leave in 2010 to King Lear and wrote a satirical piece called ‘How To Write About Manchester United’ in the vein of Binyavanga Wainaina’s famous piece). 100 pieces on Rooney being the bad guy during that whole episode appeared so I decided to go in the opposite direction and it piqued people’s interest.

In terms of yourself don’t be afraid to ask for help, I’ve done the things I’ve done largely because someone was willing to give me a hand and take a chance, so having the idea that you can do everything by yourself won’t get you very far.

One response to “Interview: The Busby Way blog on all things United”