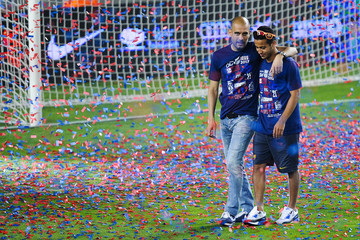 Cope Radio in Spain on Wednesday night reported that Thiago Alcantara had decided to snub Manchester United for Champions League winners Bayern Munich. It still needs confirming but the radio station would not be known for having the best links to Barcelona given how they once got sued for making doping accusations about the club.

Juanma Castaño is the Spanish journalist that broke the story. He is also a reporter for Cope Radio, and one Graham Hunter, a Scot that happens to know a lot about football in Spain, claims has a reasonable track record. I’m a little cynical though.

After giving the exclusive, live on air, Castaño seemed to have bottled it. First of all he admitted to panicking, then mentioned how it was summer so these stories should be taken with a pinch of salt. That didn’t sound too convincing.

Also, Castaño gave a hint midway through his exclusive that the deal is closed and can be confirmed in a matter of hours. Really?? He sounded pretty definite before shitting a brick towards the end. Plus, if it is imminent, I reckon Bild or another German media outlet would have it. There is nothing whatsoever being said so far in Germany regarding the story.

All in all though, unless there is a massive change of events, I’m not buying this story.

Kudos to Tom Coast and Jonas Giæver for making sense of the interview via Twitter. My grasp of the Spanish language is little to none.