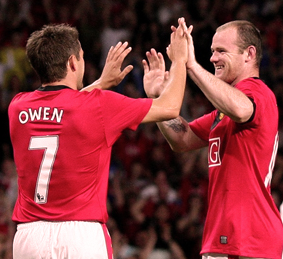 Of all of the magnificent number 7’s Manchester United’s been graced with over the years, although Michael Owen may certainly not appear anywhere close to the top of the list his recent opinion on Wayne Rooney’s future with the reds makes complete sense. Having played alongside one another both with United and England, Owen recently told Sky Sports that Rooney just feels under appreciated – and needs love. Love? Let’s get this straight after the immense contracts, over 200 goals to his name and countless accolades to go along with his name: the recent transfer request from the Englishman doesn’t seem to add up.

Even though Sir Alex Ferguson’s made it quite clear that Rooney requested to leave the club for the second time since the 2010 debacle, Owen believes that Rooney’s true passion lies within Old Trafford. The former United front man told Sky Sports “I don’t think it’s a case that it’s his last chance for a big move, you don’t get anywhere bigger than Manchester United […] It’s more a case of, is he wanted, is he loved, is he appreciated?  He wants to be the top man, the main goalscorer, and I think that’s what it all boils down to.”

Owen may make a few key points that Rooney wants to be the centre of attention; however, he’s not the front man that United need. The current red does much better in the attacking midfield role he was given under Sir Alex and should realize the thirty-plus goal seasons may be behind him. So, is he loved? His commitment to United is questionable with the transfer requests, and we’re left wondering will a big club make a move and steal Wazza. Overall, Rooney hasn’t come to terms he’s no longer our front runner and United may not look towards him to drive the reds forward any longer.

Rooney can certainly be blamed for his actions, but Ferguson is not completely innocent either. Ironically enough, Rooney gave his request just as Ferguson announced his retirement – was it Fergie getting back at the man, or something else? Although we may never truly understand the complexity behind the whole situation, Rooney was not the better person. Regardless if he agreed or not, Rooney may have gone about the entire situation wrong again and instead of letting the supporters know of his commitment to the club – he dug himself a deeper hole.

Owen concluded his statements with “Why would he want to move away from a club like Manchester United?” Just as Ronaldo left to his favorite boyhood club, Real Madrid, Rooney may be having reservations towards where his heart may lie. Although I believe he’s a red through and through, another chapter may be lying ahead for him and even though it may not be the brightest, Wayne Rooney has to please – Wayne Rooney.

4 responses to “Where is the love? Owen addresses Rooney’s needs”