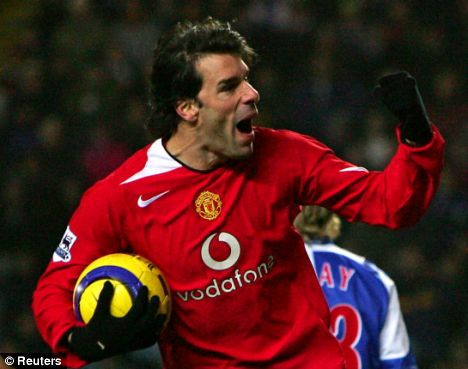 Looking back at the relatively short but successful career with Manchester United, Ruud van Nistelrooy’s legacy he’s left with Old Trafford remains uncertain. A true gem of a striker during his days with the reds (2001-2006) his initial fee of £19million pounds looks like a steal upon reflection nearly eight years removed since his last days at Old Trafford. And despite his prolific goal-scoring for United during his five years in the Premier League, that half a decade brought on a few earth shattering spats with Sir Alex Ferguson signaling to the end of an era for United.

When in doubt, drill the ball into the Dutchman and he would do the rest. One of the best United strikers to play with his back to goal, van Nistelrooy’s physical presence and technique propelled him into the upper echelon of United football. And let’s not forget, Ruud van Nistelrooy made quite the impression upon entering the Premier League as he tallied in eight consecutive matches in just his first season. Along with the 23 goals to his name in his first season with the reds, he was also coined the PFA Players’ Player of the Year.  After a brilliant first campaign with his new club, there was no sophomore slump for the now 37-year-old as he continued to tear apart the Premier League. With 25 goals in his second season under Sir Alex’s tutelage, he noted “losing is not in my vocabulary.” Constantly running in the final third, he capitalized on defenders mistakes and seemingly caught oppositions goalkeepers out of position with absolute ease.

What may separate the tall, yet sturdy Dutchman from other strikers during his time was that he rarely shied away from a potential goal-scoring opportunity. Ruthless in front of the net, he was quick and effective with his shots as he never dilly-dallied around the penalty area – he made his opponents pay. Furthermore, whether it be pace or finesse he was a master of finding the “back of the ole onion bag” as Tommy Smyth coined the term ever so well.

During his years with United (in particular the first few years) Ruud immediately took every match upon himself, win or loss. Famously he attributed the reds’ success or lack thereof to himself as he told MUTV: “When it comes to losing with United, I feel solely responsible for it.  I can’t help it. My brain will work like mad after a defeat. I want to know where I have made the wrong decisions, how I could have changed things for this fantastic club.” A truly admirable statement by a relatively grounded player at the time, made the appearance that in just a few short years the philosophy of Manchester United had been ingrained into his memory and winning was now, a must.

150 goals and 220 appearances later, 2006 brought a tear to my eye. Despite an amazing tenure with United – being bounced from the League Cup final against Wigan Athletic was the defining moment in which I knew he’d be on the way out. Call it what you’d like but the situation with Wayne Rooney’s exclusion from Sir Alex’s final match in charge is oddly similar to that of Ruud’s final hours at Old Trafford.

The reason for Ruud van Nistelrooy leaving the club seems clear as day nearly eight years removed – his rift with Sir Alex Ferguson and of course the infamous training ground spat with Cristiano Ronaldo. Although initial reports were denied by the Dutchman of the indigent, he’d been benched for six straight Premier League matches. In the typical Ruud fashion he made Ferguson think twice about outcasting the larger-than-life personality as he netted two game winners against West Ham United and Bolton immediately following the absence from regular play. In terms of the training ground altercation, the Dutchman became increasingly unsettled with Ronaldo’s lack of passing and decided to take matters into his own hands, exclaiming “go crying to your daddy” which reportedly to Setanta Sports was referencing the assistant manager at the time, Carlos Queiroz.

Was van Nistelrooy a legend to Manchester United? I wouldn’t dare say he was United’s best striker per say, yet I’d make a strong case of his importance during his five years with the club. A big-time player who recorded many big-time goals brought United success; however, a footballer’s ability only goes so far. The boisterous frontman began to feel entitled to the limelight with Manchester United and as we all know, no one is bigger than the club especially United. Hate him or love him, the now retired footballer gave plenty to Manchester United, Real Madrid and the numerous other notable clubs he appeared for during his expansive career – so for that, we thank you Ruud.